Crowdfunding Campaign for Animated Film the Lyosacks Launched on Indiegogo

Lima, Peru -- (ReleaseWire) -- 12/12/2016 --Passionate, Lima-based animator, Alvaro Calmet has just launched a crowdfunding campaign on Indiegogo to raise funds for his next project – an animated film based on his successful YouTube animated show, The Lyosacks. The one-hour film will feature the same well-loved characters and will follow them through their adventures as they battle their most challenging enemies to date on their quest to make music together, and save the world.

The movie will see The Lyosacks up against a very difficult moral dilemma. They will have to decide if they should deliver their mortal enemy, the evil Dr. Yequil, the smartest kid in the world, to invading aliens who will otherwise exterminate mankind – or band together and take the higher road.

Calmet is asking backers to help him fund his project so he can purchase new drawing and animation software, improve his technical equipment, and pay the voice actors, who include the esteemed American voice actor, Jon Bailey. He is confident that with a modest budget of $3000, that he can cover the necessary expenses for the project.

Part of Calmet's intention through his work is to demonstrate that filmmakers don't need a huge budget to create a great film – they just need a great story. Multi-talented Calmet, who has been producing the show-version of The Lyosacks on YouTube for the past six years and has within that time garnered over 86,000 subscribers, will be performing the animation, music, editing, and the majority of the production work. If the Indiegogo campaign yields more than his $3000 benchmark, then his plan is to improve the film even more with better animation and more music and voice actors.

Contributors can choose from an array of excellent perks, including a chance to be in the movie as a ninja, zombie, soldier, or civilian. For only $100, backers gain access to a closed Facebook group with the voice actors where they can view updates as the project progresses and even take part in discussions.

To learn more about The Lyosacks and the campaign, visit the film's Indiegogo page.

About Alvaro Calmet
Alvaro Calmet started The Lyosacks in 2010, when he was only 15 years old, with a desire to run a long-standing animated show. Using each episode to hone his craft, he is now the creator of one of the longest running animated shows on YouTube. Through creating this full length film, Calmet hopes to create a work that other people can enjoy. 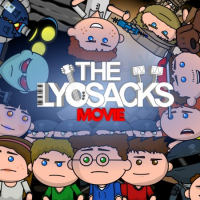