Rockport, ME -- (ReleaseWire) -- 07/11/2017 --For enthusiastic backers and creators, the crowdfunding experience has just evolved into a more sophisticated, efficient and profitable system with Crowdfunding Insiders. Though membership in the Crowdfunding Insiders community, backers are now able to build up a personal revenue stream based on their involvement, while the creators will receive mentoring and early support, almost guaranteeing campaign success.

Crowdfunding Insiders is not only improving the experience for backers and creators. It also enhances the reputation of the industry by vetting projects before they are launched and helping creators create and manage successful campaigns that all backers, both casual and enthusiastic, will appreciate. Through this patent-pending Crowdfunding 2.0 upgrade, the problems that are emerging in the crowdfunding model are addressed, which means everyone stands to win.

More than 5,000 new campaigns are launched every month. These numbers have served to attract immense interest in crowdfunding, motivating greater innovation and connecting people with the worthwhile products that can improve their lives faster than other business models can. However, this popularity is also the industry's weakness. With so many campaigns, some are being launched that end up not being successful. Some products are not delivered on time, and in extreme cases, not at all.

Crowdfunding Insiders was created to streamline the experience while also increasing engagement with interested backers – the community that has become the backbone of the industry. Here's how it works.

Creators bring their potential projects to a professional staff who will review the product and the overall project.

If a product passes the first review, it will be submitted to the entire Crowdfunding Insiders community.

Each member has the option to pre-pledge to support the project. This means creators will know how much they're being pre-funded on day one of the projects, and community backers will always know when a campaign is set to launch so they can take advantage of early bird rewards.

In return for their input and involvement, community backers will also share in the profits of each campaign they back in the form of reverse royalties. 80 percent of reverse royalties will be shared with community members. For those that do extra promotional work of a project, it is possible to earn even more of this pool of revenue.

Crowdfunding Insiders will also improve the creator-backer relationship by encouraging features such as a timely delivery guarantee, priority shipping, and satisfaction guaranteed.

This system, which has already been immensely successful with several campaigns, is a foolproof method of increasing revenue and reducing risk for everyone.

Right now, those interested can become a member of the Crowdfunding Insiders community for half of the full membership price. Backers and creators who act quickly can also take advantage of an early bird special, which offers an even greater membership discount. There's no risk in becoming a member as satisfaction is guaranteed. To learn more or to become a member, visit the Crowdfunding Insiders Indiegogo page.

About Crowdfunding Insiders
Crowdfunding Insiders is a subsidiary of kulaBrands, a pioneering company started by Peter Gantner, Doug Kyle, and Yaan Gulledge, and represented by billionaire businessman and Co-Founder of Priceline.com, Jeff Hoffman. Hoffman is the company's Official Spokesperson. KulaBrands was created to foster the developing potential of crowdfunding. Their mission is to help creators who are not yet ready for traditional venture capital but who still have the visionary products and commitment necessary to be successful. Through mentoring, they work to ensure success at the crowdfunding level and beyond. KulaBrands has already helped numerous creators achieve their goals and move on to the next stage in their business careers, including Len Kensay of Zip n' Store and Cliff Henthorn of Freedom Charger. 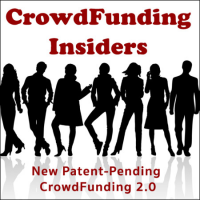