Stepping outside the box yet one more time, Nick’s Kitchen in Daly City unpacks dessert with a new vegan twist.

Daly City, CA -- (ReleaseWire) -- 11/08/2017 --Neighborhood favorite, Nick's Kitchen debuts three new desserts not typically found among vegan food fans. But, since when has the new vegan restaurant in Daly City ever been tasked with staying inside the box? In keeping with their wholesome bravado, they've taken a commitment to morphing comfort food into healthful food to a new level. Think, culturally celebrated desserts with a guilt-free twist. Now think, vegan Halo-halo, Leche Flan, and Ube Ice Cream now served on the peninsula at the only spot that has such nerve.

So what are these vegan desserts exactly? Translated "mix mix" in Filipino, Halo-halo is a mixture of shaved ice and evaporated 'milk' that highlights boiled sweet beans, coconut, sago, agar jelly, tubers, and fruits. Leche Flan is a créme caramel custard typically made of eight eggs but, certainly not in this case. A delight for the eyes with a trending taste, Ube Ice Cream, also indigenous to the Philippines, uses a bright purple sweet potato as a base for this artisanal dessert.

Creative enough to bring the Halo-halo Filipino dessert to the vegan crowd, it was actually the Leche Flan and Ube Ice Cream that took six months to perfect. Reina Montenegro, the chef, and co-owner of Nick's Kitchen with Kenny Annis said, "Months of trial and error helped me crack the code. When I nailed down the taste suddenly, like magic, it all just worked. I'm thrilled when our guests say, 'My gosh! This tastes just like what my grandma used to make!'"

About Nick's Kitchen
In 2010 Nick's Kitchen was established in Daly City, California. Reina Montenegro and Kenny Annis purchased the restaurant in 2015 and switched to a vegan menu in 2017. The San Francisco area vegan restaurant is open for breakfast, lunch, and dinner with full-service or drop-off catering. 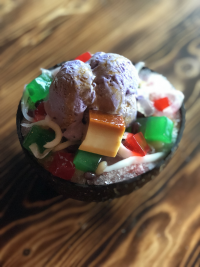