DCTV invites public to the firehouse for indie film’s free night out.

New York, NY -- (ReleaseWire) -- 09/13/2011 --For its annual extravaganza, DCTV is hosting another of its legendary Open Houses, where it invites the public to its landmark firehouse to get a taste of all of the services it has to offer to independent filmmakers and media artists. Sponsored by Brooklyn Brewery and The L Magazine, this free September 22nd event will feature an open bar, sample workshops, equipment demos, film screenings, facility tours, discounted memberships, raffle, after party, and more!

Among the highlights of the event is an open bar provided by Brooklyn Brewery, from 7pm – 8pm, and again during the after party at 10pm, featuring a DJ set by Big Party, also known as East Village Radio’s Michael Hirsch, whose beloved show, Contemporary Adult, has been rocking New York City with the best rarities of 60s/70s Rock, Soul, and Disco.

Thanks to the generosity of The L Magazine, DCTV is thrilled to raffle off an Apple iPad2. The winner will be drawn at 9:55pm sharp, and one lucky attendee will go home with the gadget everyone wants. All raffle ticket proceeds will go to help support DCTV services.

In addition, DCTV’s Fall 2011 Open House will offer sample workshops to introduce the public to some of its hands-on classes, ranging from the mainstay Final Cut Pro to the ever-popular After Effects and Video HDSLR. DCTV will also be offering the opportunity for visitors to test-drive the latest production equipment available to rent from DCTV, including the game-changing Canon 7D camera and stellar new LED light panels. Short films will be screening throughout the night, featuring an array of innovative and provocative films from the DCTV Presents signature screening and event series, as well as some of DCTV's own award-winning productions. DCTV will also be providing tours of its facilities, from its state-of-the-art edit suites to its community media lab.

“We just love meeting other artists and knowing that there are people passionate about making things just as much as we are,” said Ashraf Rijal, Equipment Rentals Coordinator at DCTV. “The creative spirit that has sustained DCTV for years is always around, but having the opportunity to see hundreds of people really get a taste of that, at one special night, is just so great.”

DCTV is proud to announce its Fall 2011 Open House and eagerly awaits everything this season has to offer. More information can be found at http://www.dctvny.org/openhouse. 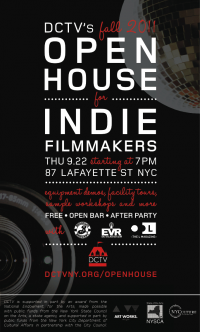