Death Spiral, First Title from the Poisoned Pencil, Is Finalist for Book Award

Phoenix, AZ -- (ReleaseWire) -- 10/27/2014 --The Poisoned Pencil, the young adult mystery imprint of Poisoned Pen Press, is pleased to announce that Death Spiral is a finalist in the 2014 New Mexico-Arizona Book Awards in the Young Adult Book category. The winners will be announced on November 21st at the awards banquet.

Ellen Larson, editor of the Poisoned Pencil, says there will always be a special place in her heart for this book and its author, because they were first. It was the first book to be published (Feb. 2014) by the new imprint, the off-shoot of Poisoned Pen Press jokily named the Poisoned Pencil by publisher of both Robert Rosenwald. Death Spiral is also the first published book by author Janie Chodosh, “an unassuming and utterly delightful woman with a mind like a steel trap,” says Larson. “I was as attracted to her ability to plot as I was to her gutsy, can’t-catch-a-break teen heroine.” This nod from the New Mexico-Arizona book awards is also the first award nomination for the Poisoned Pencil.

The way Larson spins the tale, Death Spiral wasn’t the first MS accepted by the Pencil, or even the second. “Not that any one of the early books we choose is ‘better’ than any of the others; indeed, they all have such different themes and characterizations that it would be impossible to compare, even were I to be so foolish as to try. But as we set out to establish our brand—edgy, topical, diverse, honest, and unique—Death Spiral was the book we thought would make the most important point of all: that our books were going to be well-plotted and well-written, without defining our line too narrowly.”

About Death Spiral
Death Spiral is the type of solid mystery any publisher would be happy to give their imprimatur. More than that, it aims to satisfy readers hankering for an empowered, three dimensional protagonist. Not that Faith is confident or a role model for her peers. She is into piercings and black leather and has a severe inferiority complex. But she has guts, and a sense of justice. The book also fits the Pencil’s criterion of having enough weight to satisfy adult readers of young adult books. Many industry professionals have noted that with the arrival of the Kindle et al., sensitive readers no longer need to worry that strangers (or friends) will see what books they are reading and disapprove.

Death Spiral is available as a trade paperback and as an ebook. An imprint of Poisoned Pen Press, one of the largest publishers of mysteries in the country, The Poisoned Pencil is committed to promoting edgy, one-of-a-kind young adult mysteries that both teens and adults will love. Visit the Pencil online at: www.thepoisonedpencil.com, @poisonedpencil, and on Facebook. 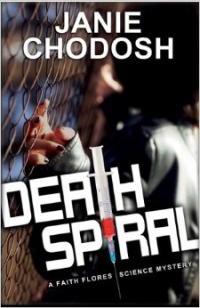