Hong Kong, China -- (ReleaseWire) -- 10/12/2020 --According to official news, recently, a number of DeFi platform launches QC liquidity mining, leading to an increase in the demand for QC mining. In order to develop more DeFi application scenarios, QuickCash issues 210 million QC based on TrueChain and will lay out QC liquidity mining on TRUE network to meet the demand of QC users to participate in DeFi ecological construction.

QC, fully called Qcash, is a stablecoin based on quantum chain smart contract and an independent digital currency issued by Qcash Foundation.The price is $0.15 (1RMB).

Qcash Foundation, fully known as QuickCash Network Pte. Ltd., is headquartered in Singapore and has branches in Hong Kong. Qcash Foundation is one of the first projects and institutions to provide stablecoin and mainstream currency tokens in the world.With its goals of decentralization, free circulation, currency stabilization, and security compliance, QuickCash provides a strong stablecoin solution to the market.

Based on the prominent characteristics of QC, QC issued by digital assets pledge has always been among the best in the global stalecoin ranking.Especially in the domestic stablecoin market, QC is the most commonly used stablecoin besides USDT!

"Security, transparency, and decentralization are the most important of stablecoin," Neaco, QuickCash Asia Pacific vice President, said when sharing the future development of QC. "These are the foundations for the long-term development of stablecoin.QC will actively be launched on more exchanges around the world in the future, expanding the successful cooperation model. And will launch more competitive financial planning and localized operation activities with various exchanges, so that Qcash (QC) can become the most convenient and popular stablecoin in customers' hands."

With the advent of the DeFi trend, pledge mining is now the hottest topic in coin circles.All kinds of "liquidity mining" have come out, and as the domestic market heat extremely high QC has also become the hot currency pledge!

At 15:00 on September 7, BTR was launched on ZB ZAPP and opened BTR/QC trading pairs.

ULU was supported for USDT/QC decentralized liquidity mining at 20:00 on September 7.

On October 1, data from Hong Kong CEO Global Station (CEOEX.COM) showed that the first strike nodes had been completed.At present, the total amount of pledge is equivalent to 52 million QC.

In just over ten days, more than 10 mining projects pledged by QC went online, which shows how hot the QC pledge is!A large number of liquidity mining projects choose QC as the main currency pledge, which not only recognizes QC, but to some extent, the pledge also reduces the liquidity of QC. Therefore, QuickCash decides to issue 210 million QC in the TrueChain network.

It is reported that TrueChain, launched on the main network in March 2019, is the first public chain infrastructure in the industry to adopt and realize the mixed consensus of DPos+fPoW, which perfectly solves the "impossible triangle" of blockchain.

TrueChain TPS can now reach the etheric lane one hundred times, and with the design and implementation of parallel computation mechanism, theoretical TrueChain TPS processing speed can reach at least 10000, and just need one second to account with cheap transaction fee. TrueChain adopts [ DPos + fPoW consensus mechanism to ensure the efficiency of decentralization and speed etc.,

In addition, the QuickCash platform closely links TrueChain and ecology, and the two ecosystems will be effectively tied together on the asset side with partners and ecology.The launch of TrueChain-version QC will help both QC and TRUE assets flow more efficiently, and will open up the flow of QC and TrueChain assets.For the foreseeable future, TrueChain will also be the public chain of choice for many large digital asset offerings. 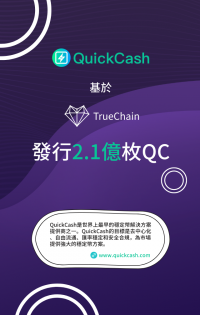