Snohomish, WA -- (ReleaseWire) -- 05/11/2016 --Digital Double has introduced the world's first fully articulated wooden bird, featuring a complete range of motion. The project is currently live on Kickstarter and featured as a "Project We Love" by the crowdfunding company.

Toy Making is a centuries old profession which has remained dormant for the last hundred years but thanks to the advent of 3D Printing, has inspired a new generation of toymakers such as designer Paul Siegel, creator of the project.

"I live in Washington State's beautiful Snohomish County and part of my daily routine involves walking and observing nature for renewal and inspiration. One of the things that has fascinated me the most is the surprising diversity of birds that visit my neighborhood year round," said Siegel, "It's turned me into a bit of a bird nut in fact. Lately I've been visited by some bald eagles. It was my first time being so close to one. The size and majesty of the bird really struck a chord with me."

It was this up close and personal view with nature that led Siegel to combine his craftsmanship of creating anatomical human figures with that of the majestic bird. With his campaign he is hoping to create the world's first fully articulated bird, specifically an accurately proportioned 1/6 scale Bald Eagle featuring a complete range of motion. The product will be 3D printed with wood. By combining wood flour and corn derived plastics, Digital Double is now able to produce tough, durable and nature friendly 3d printed products.

The Anatomical Toys Campaign 'For the Bird Lovers' is live on Kickstarter and available to support and purchase: https://www.kickstarter.com/projects/451963128/for-the-bird-lovers

Backers that pledge on the largest tier are being given an extra incentive by the addition of a free 1/12 scale biped, magnetic stand and clip for mounting the eagle ($270 total value for only $190).

About Anatomical Toys
Anatomical Toys (aka A9-RIGS) are a revolutionary collection of articulated products created by Digital Double. They were first designed and released in 2012 and have been awarded multiple patents (with others still pending). In 2012 A9 made history by becoming the first ever mass produced 3D printed product with now thousands of units circulating internationally to over fifty countries around the world. The A9 bipeds remain to this day, the only artist manikins that can achieve every pose humanly possible. 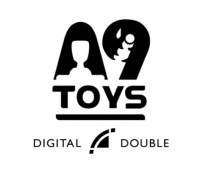 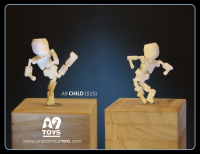 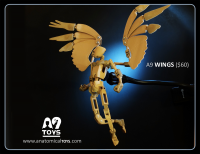 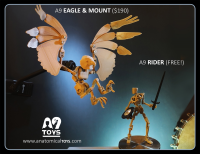 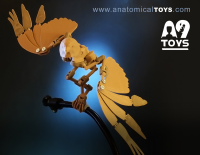