Maria is now studying film directing at the prestigious American Film Institute (AFI) in Los Angeles, CA, from which she will graduate in December of this year.

"My thesis film at AFI is a psychosexual thriller about Isabelle, a serial killer who uses the blood of her victims to paint. When Isabelle meets the performance artist Camila Braum, she finds out that they both might have more in common than she had expected. Will Isabelle allow herself to let Camila in without giving in to her true nature? In delving into the darkest depths of these characters, my goal was to explore such taboo themes about femininity and female sexuality."

While she continues her studies at AFI, she has already created an impressive body of work. Maria has directed six short films, fashion commercials and a web series. In addition, she has worked as an assistant director for a number of feature films and TV series.

She had the opportunity of working closely with renowned directors like Hector Babenco (Academy award nominee for "Kiss of the Spider Woman") and Eduardo Coutinho ("Edifício Master"). Maria worked as an AD on the last two movies of Babenco's career ("My Hindu Friend" and "The Man Who Stole a Duck").

The short "The Man Who Stole a Duck" was exhibited in the Venice Film Festival as part of the feature film Words with Gods by Guillhermo Arriaga.

"My Hindu Friend" is an autobiographical story starring Willem Dafoe. Diego (Dafoe), is a film director very close to death, surrounded by people who are having trouble dealing with his current tempestuous mood.

Chances are he won't survive, but if he does, it means he needs to relearn how to live.

The role of an assistant director on a film typically includes tracking daily progress against the filming production schedule, arranging logistics, preparing daily call sheets, checking cast and crew, and maintaining order on the set. They also take care of the health and safety of the cast, which in the case of My Hindu Friend meant assuring that lead actor Willem Dafoe was comfortable and had everything he needed during the production.

Maria also worked as a second AD on "Pedro e Bianca," a Brazilian TV series Winner of the International Emmy Kids Awards. All shorts Maria wrote, directed and produced in Brazil were approved and granted tax deductibility status for fund raising purposes by the government of Brazil.

The first short she directed "A Margem dos Olhos" had Clarissa Kiste as one of the main actors. Clarissa is now playing a character in the first Brazilian Netflix series called "3%."

Maria just started sending "Solo," one of her shorts, to festivals for screening later this year. Solo is the story of Silvia, who is a ballerina completely consumed by dance. Determined to rehearse until she achieves perfection, she locks herself in her apartment for days in a row. Her compulsion makes her enter a state of growing delirium, unable to sleep and hardly eating. Her rehearsals are only interrupted when she notices a dirt stain on the carpet. Silvia tries to clean it in vain. Tormented, she tears out the carpet trying to find where the stain comes from, but the stain relentlessly continues to grow and invades the apartment little by little.

"My main focus as a writer-director is to tell female driven stories. Thriller and horror are my favorite genres. "Nightcrawler," "Under the Skin," "A Girl Walks Home Alone at Night" and "Let the Right One In" are movies that have truly influenced me as a director.

Exploring the dark side of human nature is a recurrent theme of my work. However, there's a dark side of women that's usually not portrayed in films and TV shows. Female characters are usually portrayed as delicate, sweet, and loving. But what happens when the dark side of our souls takes over? This is a question I've often asked myself and the main theme I want to examine as a filmmaker."

About Maria Alice Arida
Having started out her filmmaking career as a cinematographer, Maria has developed a keen visual sensibility that is present in all of her films. Although Maria is no longer a cinematographer, she is passionate about still photography, and loves to photograph with her 35mm film camera made in the 80s! 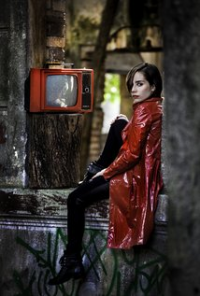