THE LIFE AND WORK OF MODERN DANCE PIONEER DANIEL NAGRIN

Dogtown Dance Theatre, like most performing arts organizations and venues, shut its doors during March 2020 in the wake of the COVID-19 pandemic. It's been an extremely challenging year, maneuvering through new restrictions and government mandates, while still wanting to support Dogtown artists and serve the mission to provide a home for dancers.

After what seems like a very long year, Dogtown is finally proud to announce its first limited capacity in-person performance scheduled for April 30 and May 1, 2021. In the return of the Dogtown Presenter's Series, Dogtown Dance Theatre is excited to host The Daniel Nagrin Celebration: A Concert of Solos by the Rebel of Modern Dance presented in coordination with the Daniel Nagrin Film, Theatre and Dance Foundation. Alongside the limited in-person performances, the show will also be available on Dogtown's new digital platform, Dogtown STREAM.

Daniel Nagrin's career as a dancer, choreographer, and teacher spanned over five decades: from the world of Broadway where he was once voted Best Male Dancer, to films, solo concert artist, and university professor at Arizona State University. He was associated with modern dance founder Helen Tamaris and co-directed the TAMARIS-NAGRIN DANCE COMPANY. He later directed THE WORKGROUP, an improvisational dance company. Mr. Nagrin is the creator and performer of an extensive solo dance repertory which he toured from 1957 throughout the United States, Europe, and the Pacific. He received numerous grants and awards from the National Endowment for the Arts, The New York State Council for the Arts, and Arizona State University among others. He received honorary doctorates from the State University of New York and Arizona State University, and was awarded one of the first $20,000 fellowship awards for Master Teacher/Mentors by the National Endowment for the Arts in 1993. As a Professor Emeritus of Dance at ASU, Mr. Nagrin focused his energies on writing on dance. His first book, How To Dance Forever, has become a handbook bible for many in the dance profession.

The Daniel Nagrin Theatre, Film & Dance Foundation oversees the estate, historical content and educational implementation of the work of American Modern Dancer and Master Teacher Daniel Nagrin. More information about the Foundation can be found at https://nagrin.org/.

Performers for The Daniel Nagrin Celebration: A Concert of Solos will include male dancers from an impressive line of careers in modern dance. Audiences will enjoy solos choreographed by Daniel Nagrin performed by Paul Dennis, Donald Laney, Shane O'Hara, Matthew Pardo, and Desmin Taylor.

Shane O'Hara, professor of dance at James Madison University, works professionally setting commissioned dances throughout the U.S., performing a concert of dance master Daniel Nagrin's solo works entitled The Nagrin Project and touring as Shane O'Hara * Solo Dance. In 2007 he presented The Nagrin Project at the Centre de National de la Danse in Paris. He worked closely with dance master Daniel Nagrin for over 25 years and has been working with the Daniel Nagrin Foundation in developing projects related to the dances of Mr. Nagrin and his teaching philosophies. Mr. O'Hara has shared his art with audiences throughout the United States and the world including concerts in Lisbon, Athens, Krakow, Rio de Janeiro, Chengdu, China, New York, and Washington, D.C. He has worked closely with the thompson & trammell dance company in residencies in Poland, Denmark, Portugal and Germany. He also was a guest instructor at Pro Danza Italia Summer Workshop in Tuscany, the Florida Dance Festival, and at the White Mountain Summer Dance Festival.

Donald Laney is currently on faculty at Western Illinois University in the Department of Theatre and Dance. He spent over 15 years as the Producing Artistic Director of the West Virginia Dance Company, West Virginia's only professional touring dance company. Mr. Laney graduated from the University of California, Irvine, with an MFA in Dance. Since 2005, he has been the Master Teacher in Modern Dance at the WV Governor's School for the Arts and in 2018 received the WV Governor's Award for "Leadership in the Arts."

Matt Pardo holds a Masters of Fine Arts degree from the University of Wisconsin-Milwaukee (2016) and an advanced honors B.F.A from the University at Buffalo (2007). He has danced for the Eisenhower Dance Ensemble, Groundworks Dance Theater, RG Dance Projects, and the River North Chicago Dance Company (apprentice). He was recognized as one of the "Top 100 Dancers in the World for 2010-2011", one of 10 Americans, by Dance Europe Magazine. Pardo is a co-founder of the Pittsburgh-based organization The Blanket, which has been featured in Dance Magazine-online, Departures Magazine (American Express), Pittsburgh Post-Gazette, and the US News and World Report. The Blanket has been funded by The Heinz Endowments, The Pittsburgh Foundation, Opportunity Fund, Arts Equity & Education Fund, PNC Charitable Trust, and The William and Catherine McKinney Charitable Foundation, as well as by private donors. Publications include an article in the Journal of Dance Education exploring how to develop a practice of performance and an insert in the Genius Guide to College Dance Programs by Angela Carter. Pardo is also an assistant professor of dance at James Madison University.

Desmin Taylor is a dancer, teacher, and choreographer based in Richmond, Virginia who began his dance journey late, starting in 2014. He quickly developed a passion for taking class throughout the DMV and North Carolina dance community participating in many classes, intensives, and workshops in various styles of dance including hip hop, urban, modern, contemporary, jazz, and more. Desmin has trained and performed with various dance crews such as Blank Canvas of VCU, Pace Setters Dance, and Studio 4 Dance Agency. He currently teaches at 4 different dance studios in Virginia, while currently in his 7th professional season with RVA Dance Collective, a premier modern dance company based in Richmond. He is also the founder of RVA Dance Life which is a workshop series that gives different teachers a chance to share their movement and knowledge with the Richmond dance community and is now finishing off its 4th successful season.

The Dogtown Presenter's Series is supported in part by the National Endowment for the Arts, the Virginia Commission for the Arts, and the Julia and Tunnicliff Fox Charitable Trust.

For more information and tickets, please visit http://www.dogtowndancetheatre.com/dps21. Virtual performances will be available beginning May 7, 2021 on Dogtown STREAM at www.dogtown.vhx.tv and on iOS applications and Roku. 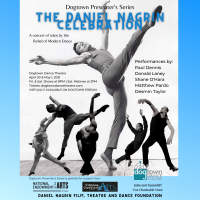