Dragon Crush: Crush Or Be Crushed, a 3D Casual RPG designed by Jim Pierce, makes substantial progress while in development of its third sprint in a total of twelve. Enjoying great response from crowdfunding supporters on Indiegogo the designer offers a free download of the popular Dragon Crush 2D version.

Santa Clara, CA -- (ReleaseWire) -- 03/31/2014 --Setting the bar even higher for role-playing games (RPG) Jim Pierce, creator of the highly addictive mobile game 3D Sudoku, reports substantial progress on his latest creation called Dragon Crush: Crush Or Be Crushed. The 3D Casual RPG is now in Sprint 3 of 12 total which will include a foundational working game with highly animated 3D models of the RPG Classic version of 2D Dragon Crush. Now in the crowdfunding stage Pierce offers a free download of the Classic 2D version of the game to supporters on Indiegogo.

For the newest version, the 3D RPG is set in the Valley of Dragomar where Dragon Crush gamers will save the Princess and destroy a Gold Dragon made from ingested gold. Once killed the dragon will dramatically become a pile of golden treasure. Pierce says, “We’re happy to bring back our gamer’s all time favorites “Beholder of the Eye” and “Ghouly” to make a second appearance in the 3D version of the game. We think their involvement in Sprint 3 will be a big crowd pleaser and to get the ball rolling, an initial level with three linked quests and working achievements is available today for supporters as well as the free download.”

Currently the design on Dragon Crush: Crush Or Be Crushed 3D is playable on Mac or PC however, with ample funding the game will be available on mobile as well. Thus far self-funded by Pierce, optimum crowdfunding support will be used for additional monsters and more hero characters to each new sprint which adds a greater level to the game and more features to play. “We always have our eye on forward motion with the Dragon Crush project. We’re already excited about Sprint 4 which will include a new hero character and a new monster with artificial intelligence.” Pierce adds.

About Dragon Crush
Dragon Crush is the innovation of James Pierce who is also the creator of the mobile game 3D Sudoku. A 3D Casual RPG, Dragon Crush is currently in development and seeks to fund its progress through a recently launched Indiegogo crowdfunding project.

For more information visit http://dragoncrush3d.com/. To make an investment in the Dragon Crush Indiegogo crowdfunding campaign visit http://igg.me/at/DragonCrush/x/6498807 or http://www.indiegogo.com/projects/help-us-make-an-epic-3d-casual-rpg-game-dragon-crush/x/6811016?c=activity. To receive the free download of the Classic 2D Dragon Crush RPG click on https://drive.google.com/file/d/0BxFh_aOGMJIxcDd3d1VOQS00Yk0/edit?usp=sharing. 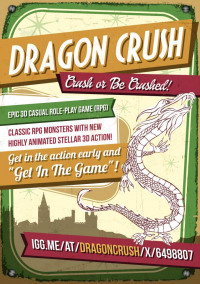