The FDA Rules to Regulate the E Cigarette

E Cigarettes Are Now Subject to the Same Regulations as Tobacco

Phoenix, AZ -- (ReleaseWire) -- 11/30/2011 --Electronic cigarettes, supposedly a safe substitute for tobacco, will be regulated as tobacco products, but not as medicinal aids. What does this mean for the consumer of electronic vaporizing devices? In short, they are not considered to be drugs or related devices. However, when advertised as a therapeutic smoking cessation aid, the e cigarette can be subjected to these stricter rules.

The electronic cigarette is a fairly new item, developed by a pharmacist in China in early 2000. Consumers looking for tobacco alternatives picked up on the trend and the electronic devices were selling strong before the patents were even applied for. It consists of a plastic or metal unit resembling popular tobacco brands. Decorative non-disposable units are made for those who want a classier accessory. To get the smoke, a liquid compound is vaporized through heat or ultrasonics, creating a mist with the same flavor as tobacco smoke. Some e-cigarettes offer other flavors as well. The power source is usually a lithium ion battery which can be charged in the car, in a product specific charging case or even from a usb port.

The pharmacist who developed the product intended it to be a method to quit smoking. While this device is probably safer than cigarettes, there are still health concerns. First is the potential appeal of a safer smoking device to younger generations, particularly if they are flavored.

Second is the concern of exposing people to harmful compounds and increasing dependence on nicotine. Electronic vaporizers contain carcinogenic chemicals found in anti-freeze. Chemicals such as diethylene glycol are vaporized and inhaled, while nicotine and other toxics are added to the cartridge to satisfy the long term smoker. The addictive compound will hook new users believing they are using a safe' product. Unlike real cigarettes, e-cigs have no warning labels for potential consumers.

Controversy surrounds these new smoking devices because of the threat to younger generations. As with big Big Tobacco, marketing is aimed at young people, and without testing and regulation, there is no way to know how big the health risks are. The FDA has voted to regulate this new industry to establish quality controls; but also to uncover the chemical composition of the devices. The results of future regulations and testing should result in a safer product, or at the least, clear warnings about any existing dangers from e cigarette smoke inhalation. The FDA will also continue to monitor claims by manufacturers that the product is a viable smoking cessation therapy. For the time being, electric cigarette companies are happy to see their products are not considered drugs or medicine, and not subject to the laws governing them. 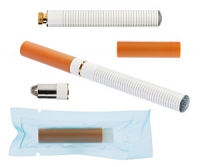