Elevating Your Game with the Instructional Kicks Pro Soccer Ball

Soccer is a game that enthralls the world. The physics of the sport is incredibly complex, but it comes with no guide book. Here to help teach the game is the Kicks Pro soccer ball.

Montreal, QC -- (ReleaseWire) -- 12/19/2016 --In the game of soccer, every possession, every shot, and every touch counts. For this reason athletes need to be as accurate as possible in every move they make. In fact, the average soccer player only touches the ball twice every possession.* What's more is that the average shots on goal in an entire ninety-minute soccer game is under ten. In turn, a soccer player needs to be absolutely confident in making every touch they take on the ball. Here to help everyone from toddlers to professional players is a new version of the traditional soccer ball: the Kicks Pro soccer ball. With the Kicks Pro soccer ball, athletes can hone their skills like never before. In preliminary trials, seventy-five percent of players saw improvement using the Kicks Pro soccer ball.

The ball has two core innovations that work synergistically in order to yield the greatest possible efficiency in terms of sports training. The first of these developments is a visual reference system that allows any player to quickly identify the correct location to strike the ball in order to achieve the desired placement. The target strike location is marked by an image of a swinging cleat on the ball, the direction to follow through is shown by a bolded black arrow, and the resulting placement is conveyed through a graphic that shows the approximate location in the goal where the ball should land. The angle of each arrow and the placement of the strike location has been tuned over months of testing, resulting an incredibly precise training tool. 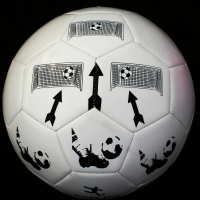