Henderson, NV -- (ReleaseWire) -- 02/07/2017 --Global Genesis Group is excited to announce their acquisition of ENGRAMS, a drama exploring the complexities of depression that was filmed on location in seven countries. The feature was acquired for worldwide distribution by USA based Global Genesis Group LLC. Like Jim Carrey's ETERNAL SUNSHINE OF THE SPOTLESS MIND, ENGRAMS is a wild, fun trip that delves into the human mind and our complex emotions by examining a young scientist who attempts to cure depression by triggering happy memories. When his girlfriend destroys everything that defines her personality, it starts a chain of events that sends him on a global search for his lost love. ENGRAMS was shot in the Fall of 2015, and it was filmed in seven total counties including; Greece, Macedonia, Romania, Poland, Holland, Belgium, and the United States.

The talented director Armando Luis Alvarez stated, "I wanted to make a movie that could help empower people to take control of their lives. Depression is what holds people back, not only in truly being themselves, but how the disease affects others in the depressed person's journey. And in the process of making the movie, I think it was fate that the refugee crisis and banking crisis in Greece started after we made plans to travel there. We decided to follow through instead of canceling. And that was a huge mirror and reminder of the world's false state of stasis that one person can't make a difference, that we all have to accept the status quo. We wanted people not to be afraid of other countries and of other people."

Further Director Alvarez continued, "When I met the team at AFM, I really appreciated the personality and cordiality of Global Genesis Group, and while we were there having our meeting, the team went out of their way to show off their other projects. We knew that by working with GGG, they would be showing off our film to the world. I couldn't be happier with the association."

Charles Morris Jr., V.P. of Development and Acquisitions for Global Genesis Group, stated, "At Global Genesis Group, we are looking for quality projects no matter the genre. We were pleasantly surprised to find ENGRAMS, a very intelligent, thought-provoking journey. It is a Charlie Kaufman-esque feature that examines the various facets of the human condition, like BEING JOHN MALKOVICH. We are looking forward to continued collaboration with Armando." 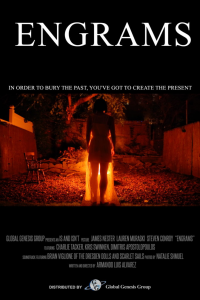