Los Angeles, CA -- (ReleaseWire) -- 03/02/2016 --EPortBook, the revolutionary new electronic stationary that turns smartphones into laptops, is live on Indiegogo and raising funds to bring the project to life.

EPortBook is a multipurpose and cross-platform accessory for pocket PC phones, tablets, smartphones, and HDMI-enabled devices, with a detachable display / screen and a detachable type-friendly keyboard in a portable form factor.

"The inspiration is from the new technology in smartphones called windows continuum that enables phones (sometimes known as Pocket PC) to be docked to a bigger screen and turn into a PC," says co-founder Gabriel Nkuna, "We wanted to come up with a portable screen and keyboard so that people can carry them anywhere and be able to be highly productive as and when they wanted to.

EPortBook's display features several major features including HDMI input, USB Port, DisplayPort, VGA input, and Audio jack Port. The Keyboard supports Windows mobile, Android, and iOS. In addition, the display and keyboard are detachable and can be used for various things at the same time and/or separately including using the display to connect to an Xbox or Playstation or using the display as a second screen for your Windows PC or Macbook or iMac.

"Other solutions in the market will be made only for docking the Pocket PC. Our solution is meant to be used with other HDMI and Bluetooth enabled devices such as Xbox, PlayStation, etc.," adds Nkuna. EPortBook's display measures at 11.6", includes a detachable wireless leather keyboard, a leather stand case, and display stand while measuring approximately 0.93kg.

The ePortBook starts at $399 on Indiegogo for early adopters. The ePortbook is now live and available for purchase on Indiegogo: https://www.indiegogo.com/projects/eportbook-electronic-stationery-for-pocket-pc#/

About ePortBook
ePortBook is a Johannesburg, South Africa based start-up that focuses on enabling productivity anywhere anytime. The company offers productivity Win32 applications on any device based on modern operating systems such as Windows, Android, iOS, etc straight from the cloud. They also offer accessories (ePortBook) for the Pocket PC to enable productivity anywhere, anytime. 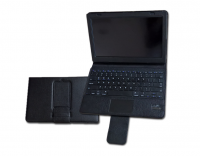 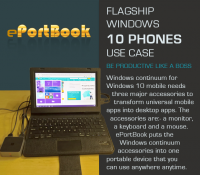 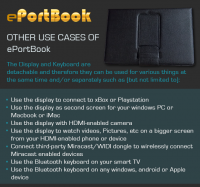