In ESCAPE ROOM, directed by Peter Dukes, four friends decide to partake in a popular escape room horror attraction only to find themselves stuck inside with a demonically possessed killer. They only have one hour to solve the room and escape with their lives.

The film marks Skeet Ulrich's long-awaited return to the horror film genre after his iconic role in the Scream franchise.

"We are so excited to work with Redbox to bring this incredible film to viewers across the country," stated Rick Romano, President of Global Genesis Group and Producer of Escape Room.

The film explores the latest trend in immersive entertainment phenomena, escape rooms, where participants are locked in a room and must solve a variety of clues and puzzles to escape before time runs out.

In Escape Room, Brice (Skeet Ulrich) is the owner of Deranged, Los Angeles's top rated escape room needs to add to the creepy factor at Deranged. At a local antiquities shop, Brice acquires the Skull Box, failing to heed the warning that the Skull Box once housed a demonic entity.

Jeff and Ben, two horror hounds, have convinced their girlfriends, Jess and Angie, to partake in an hour at Deranged. Inside Deranged, the friends work on finding a way out of the room. Soon they realize they aren't alone. RJ, an actor in a mask, shares the dark room with them, enveloped in shadow and chained to the wall.

When Jeff opens the cursed Skull Box looking for clues, he frees the ancient demon trapped inside. The kids will have to continue "playing the game" and solve the room before time runs out or RJ will kill all of them. Time is ticking. Their lives are on the line.

Escape Room makes it debut exclusively at Redbox kiosks across America on May 8th, 2018. Fans can check the film's availability at their nearest kiosk on the Redbox website. 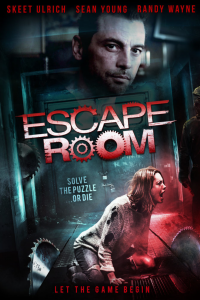