Bangkok, Thailand -- (ReleaseWire) -- 07/10/2018 --The high society of Bangkok, Thailand attended the opening film of the Bangkok ASEAN Film Festival on 4th July. The festival was introduced by the Deputy Prime Minister – Wissanu Kruea-ngam.

However, few expected that the film would be a savage attack by a British-born director on the abuse of wealth and power, including violent and disturbing scenes of abuse.

While some were shocked by the choice of film, there was praise from many audience members. Local film programmer Lekha Shankar felt that the film's "shock-value could possibly shake up the world." Author and composer S.P. Somtow, also approved, 'it sets a higher intellectual bar for film in Thailand.'

'Eullenia' was certainly a controversial choice for the opening film; the story of a billionaire banker who believes that in Thailand all his worst desires can be fulfilled purely by offering cash.

Alec Newman ('Dune' and 'Children of Dune') stars as Marcus Hammond, head of the Eullenia Corporation, a micro-finance lending institution.

Hammond is supported by his assistant, played by Thailand's number one international star Vithaya Pansringarm, who rose to fame starring in 'Only God Forgives' alongside Ryan Gosling.

Director Paul Spurrier acknowledges that his film might be seen as the first #MeToo film, but insists that it was written and developed before the recent revelations about high-profile characters like Harvey Weinstein, or even before Donald Trump's presidency.

"Unfortunately there is little new about individuals with almost unlimited wealth and power using it to exploit those lower down on the social and economic ladder. Actors and Producers tend to live their lives in the spotlight, so their behaviour is perhaps more likely to be made public. But the greater the power, the greater the potential for abuse. And if you think Harvey Weinstein was powerful, just think about the many multi-billionaires in finance and industry, the sort of power they wield, and the sort of abuse that can follow'.

Asked how he felt about some people walking out of the film during one of its most harrowing scenes, Spurrier responded, "I understand there are scenes that are hard to watch. But even the people who have found themselves unable to watch the film have agreed that it isn't exploitational. I had no interest whatsoever in making a 'slasher' film. The film not only explores the effect on the victims of abuse, but also attempts to explore what motivates the abuser. And while money might give apparent power, the film also shows that real power can come from within each and all of us."

Paul Spurrier has directed two previous films in Thailand. 'The Forest' won the respected NETPAC Award from the Network for the Promotion of Asian Cinema, the first time a Western-born director had taken the award, as well as a number of other festival awards.

'Eullenia' was produced by Hollywood industry veteran David Cluck, whose screen credits include the Oscar-winning 'Monster' and 'The Artist'. 'When I read Paul's script, I could see that it not only had all the elements that could make it a popular commercial film, but also dug deep into some very sensitive and timely issues facing our world.'

Spurrier has made his last three films outside the conventional studio system.

'I have been very lucky to be able to make my last three films entirely independently. The dark revelations about the world of the super-rich that we show in 'Eullenia' were clearly never going to appeal to the Hollywood moguls.'

'Eullenia' will receive its international premiere at the BIFAN Festival in Korea on 19th July. 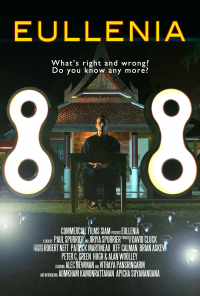