Kanye West announced he wanted to run for President in 2020 with many saying he would make the best president in history. Since the news of his bid to run for the top job, fans all over the world have come together to show their support. Once company has gone that little bit further by launching a Kanye West For President T-Shirt.

Los Angeles, CA -- (ReleaseWire) -- 09/07/2015 --Expression Tees has today announced they are backing singer Kanye West for his Presidential bid for 2020 by launching a Kanye West President T-shirt. The company, who believes the singer would make a great president, has launched the T-shirts to show their support and allow fans and people who want a better America to get behind the singer.

The T-shirts, which are available on Amazon, are made from 100% Pre-shrunk Cotton and are all printed in the USA. The T-shirts come with the slogan 'Kanye For President' and show a clenched fist. They come in ten different colors including red, black and grey.

Kanye West is being backed by media experts all over the world as a serious potential presidential candidate; some political experts also believe with his straight to the point actions that he would bring America together. Since the singer announced the news, some political experts have said the presidential race of 2020 will be the most exciting in the past century.

When Expression Tees was asked about the T-Shirt design, a spokesman said: "I wanted to incorporate the fist as a symbol of black rights, black power, and to invoke a "black lives matter" type of feel, which is also a very popular and timely issue happening right now."

The Kanye West T-Shirts have only been launched this week on Amazon (http://www.amazon.com/dp/product/B014QIQR7Q), and already they have become popular with people who want to see Kanye West become a future president. The T-shirts are available in different colors and sizes and give people the chance to show Kanye West their support for his bid to win the presidential race in 2020.

About Kanye West President T-Shirts
The Kanye West T-Shirts come in different sizes and colors and allow fans to support the singer to become a future president. 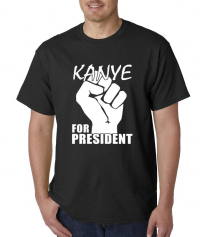