Eye specialist from Italy supplies key information regarding a disorder that causes a misalignment of the eyes that affects 3 to 4% of the population, even if they’re not aware of it. She says there’s hope and diagnosis may be as simple as taking a photo with one’s cell phone.

Torino, Italy -- (ReleaseWire) -- 12/07/2016 --Apparently, a simple photo with a cell phone's flash can be useful to diagnose what affects more people than was once realized. To that end, Maria Elisa Scarale, a Turin ophthalmologist specializing in eye movement disorders, offered information about a widespread condition in a recent interview. She outlined that strabismus is often misdiagnosed and therefore not always taken care of properly. Often it can cause other problems, such as headaches, double vision, or the abnormal posture of the head known as torticollis. In her experience, many patients have become aware they had the disorder while watching a 3D movie, just by realizing that they can't see it clearly.

Dr. Scarale started by explaining a bit about the eyes, their functionality, and her specialization. She began, "We should consider the eye as a sphere 'embraced' by six muscles, which are like the reins of a horse: if they're drawn a bit more or a bit less, the sphere turns. My work involves the rebalancing of the various reins."

She continued with discussion regarding when the eye disorder is first apparent. She adds, "So far as strabismus is concerned, it affects children at birth. Some are diagnosed even before leaving the hospital. Others find their cases emerge in the early years of childhood when parents seek care from pediatricians who may find it during screening visits. In some cases, strabismus is triggered by high fever or severe stress. In adults, the main cause of strabismus is stroke, but it can also result from trauma, neurological problems, tumors, and hyperthyroidism." Therefore, the doctor says it's important to treat it as soon as possible, in some cases before the age of three which could prevent permanent damage. However, in some cases it's obvious, in others it's mild enough to go unnoticed until adulthood.

Dr. Scarale added that there are adults who have are slightly cross-eyed, who are never diagnosed with strabismus. "The cross-eyed person does not have three-dimensional vision, as they see with only one eye," asserts the doctor. "Others find that they suffer from this condition by investigating the causes of a persistent headache or a stiff neck. To check the symmetry of the eyes, one can take a picture with a cell phone using the flash. In this way, one can see if the reflection of light is centered and symmetrical in the dark section of the eye."

"It happens that some children have an eye with a visual function that is lower than normal, not from an evident disease of the eye, but due to a simple refractive defect. The disorder, called amblyopia, or lazy eye, can in turn cause strabismus. The risk is that the child may not regain good vision, and may have misalignment if nothing is done in time, i.e., within 3 years. It is, therefore, important to receive a diagnosis, even at an early age, using an appropriate approach," concluded the ophthalmologist.

But is there a cure? The majority of strabismus cases can be improved and some can be corrected. "Some cases, known as refractive cases, are corrected with glasses and must not be treated surgically under any circumstances," says Maria Elisa Scarale. The doctor continues, "Others necessitate the occlusion of an eye or optical exercises, while for others it is necessary to intervene surgically—for adults under local anesthesia, and for children with general anesthesia. In some cases it is very useful to employ the botulinum toxin, which blocks certain muscles and improves strabismus. The techniques used today are minimally invasive. Usually, one operation is sufficient, but occasionally it is necessary to undergo a second one. In the case of children, it may be necessary to intervene even after a number of years. The techniques for treatment are less invasive than a few years ago. In a couple of days the wounds close and in a week even the redness will disappear."

While Dr. Scarale says medical professionals still don't know that much about strabismus, they do know it cannot be considered an aesthetic problem. She says, however, that there is a psychological component of this disease that should not be overlooked.

About Maria Elisa Scarale
Maria Elisa Scarale has a degree in Medicine and Surgery and in Orthoptics and Assistance of Ophthalmology from the University of Bologna, where she has specialized in ophthalmology. She has worked on outpatient and surgical activities on strabismus at the Koelliker Hospital in Turin. She furthered her studies at the Bascom Palmer Eye Institute in Miami and has written several scientific publications on strabismus. She is a co-founder of the CLK Eye Center of Turin. For the 2016/2017 season, she is official eye doctor of Juventus Football Club. 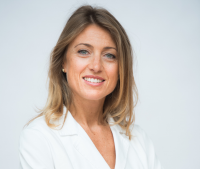