Butcher equipment and large cuts of meat more popular than ever thanks to the influence of Channel 4 chefs.

Lancashire, England -- (ReleaseWire) -- 02/21/2013 --Television chefs The Fabulous Baker Boys’ have created a home butchering renaissance since their highly successful show launched on Channel 4. The show which centres around two brothers concentrates on their love of baking, butchering and cooking. The butchering aspects of the show have in particular caught the attention of the nation. Many viewers had never explored the possibility of preparing large cuts of meat, so were interested in this new food preparation technique.

During the recession, many people are keen to save money wherever they can. People are constantly on the lookout for money-saving exercises that will not compromise the quality of their lives. One of the most effective ways to decrease expenditure without decreasing quality is to invest in bulk products and bulk goods. This can be applied to food. Buying large cuts or joints of meat can work out cheaper per serving than buying small, individual portions. This cost-effectiveness makes monetary sense but requires more work.

This explains the success of the Fabulous Baker Boys, they have imparted the knowledge of large scale butchering and made it appear attainable for the common man. Their informal style of presenting and food preparation has made butchering less exclusive than ever. It has led to an increase in Butcher Knife and equipment sales.

Viewers have discovered that it is not necessary to have large cumbersome machines to butcher animals such as chickens, turkeys and lambs and even large cow or pig joints. High-quality Butcher Knives can make quick, efficient and clean cuts through meat. Butcher quality cuts can be produced almost instantly at a fraction of the price paid for a professional.

The Fabulous Baker Boys are known for creating a wide range of family favourites and warming dishes. Pies, stews and broths are created using the freshest of ingredients and the most effective of butcher equipment. The brothers have also testified about the importance of proper equipment care, giving a full guide to helping the equipment retain its peak performance. It is vitally important for butcher knives to remain sharp and strong. A blunt and weak knife will not perform to the desired level. The brothers preach the use of steel sharpeners. Regularly using a steel sharpener will help the butcher knife retain its quality. Furthermore, a wooden butcher block will not serve to diminish the quality of the butcher knife that cuts atop it. 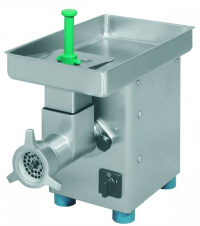