To begin, Santanna showcased their Chairman of the Board, Wayne Gatlin.

Wayne Gatlin served in the U.S. Army Reserves from 1966 to 1972 in the communications group of a 155 millimeter self-propelled howitzer unit stationed in his home town of Waynesboro, Mississippi.

Gatlin stated, "This was during the time when you ran wire for communications once you dug in and used radio communications operating on vacuum tubes. I had a double job description and served a full 6 months of active duty training, rather than the routine 10 weeks, during basic at Fort Knox, Kentucky, and Fort Gordon, Georgia. A funny thing happened at Fort Gordon... A couple of guys asked me if I wanted to go to Augusta with them that weekend to some golf tournament called the Masters, which I thought was pretty silly. Of course, today, I would go at the drop of a hat!"

The Reserve unit met for one weekend each month and for two weeks of active duty each summer at locations such as Fort Hood Texas or Camp Shelby Mississippi. His unit was not activated for foreign service during his tenure. Wayne concluded his service as a Sargent E-5.

Following Wayne was his son Jeff! Jeff is the 2nd out of 4 of Wayne's children. Jeff served in the United States Army as a Reservist from 2000 to 2008. He attended basic training at Fort Knox, Kentucky and permanently joined the Contracting Directorate of the 377th Theatre Sustainment Command in New Orleans, Louisiana.

Jeff Gatlin stated, "My unit was deployed to Kuwait in November 2002 and provided logistical support for ground units operating in Iraq until July 2003. I was a Commandant's List Graduate from the Army Non-Commissioned Officer schools (PLDC/BNCOC Phase 1) at Camp Shelby, Mississippi in July/August 2005".

Cunningham stated, "I served on board the USA Plunger SSN 595, the USS Guitarro SSN 665 and the USS Sturgeon SSN 637 as Sonar Supervisor and Leading Petty Officer. I received several awards and accommodations including the Navy Achievement Medal and a Heroism award for action in the North Irish Sea. I deployed 6 times in my career".

Santanna Energy's Financial Operations Accountant, Kevin Hawlik, is a veteran of the United States Army and the New York City Police Department. He has served in both capacities.

Hawlik stated, "I enlisted in December 2006, under the delayed entry program for active duty service as a Cavalry Scout (MOS 19 Delta). I entered basic training January 11, 2007, and deployed to Baghdad, Iraq in August 2007. I spent six months in country at an outpost called "COP X-Ray." This was the second combat outpost since the Vietnam War under the command of Garry Owen 1-7 Cavalry, stationed out of Fort Hood, Texas.

I took part in over one hundred combat missions as point man for door to door insurgency operations during that time. We captured numerous high value targets and discovered several IED's during our operations. I returned home in February 2008.

I deployed for a second time February 2009. Our mission this time was to help develop democracy and support Iraqi forces in executing their mission. I returned home February 2010. I was honorably discharged May 2010".

Kevin also joined the New York City Police Department July 2010. He spent six months at the academy and graduated from Madison Square Garden December 2010. His first foot patrol was New Year's at Time Square. He was assigned to the Bronx 47th Precinct and maintained a foot patrol for approximately nine months. In September 2011, Kevin left the NYPD to go back to college.

Kevin's brother is also still serving. He's part of the Air Force and currently serves as a Joint Terminal Attack Controller short for (JTAC). He just returned home from an undisclosed country a few weeks ago.

Kevin's brother is still active and you can see him on the far right in the 2nd image. His alias name is "Sloan Sinclair."

Weisgerber stated, "I was a Staff Sergeant when I got out".

Weisgerber stated, "They were all pilots in the United States Air Force in which my Father, Brother and Grandfather all served over 20 years".

Santanna Energy's Sales and Operations Analyst, Darmella Richardson, also has plenty of family members who have served! Five family members put their lives on the line to protect others.

Darmella's paternal grandfather (deceased), Lessie B Triplett, served in the Army in 1941 when he was 17.

In a military photo displaying his name and title, Richardson stated, "Although his name says Lessie P. Tripplet, it is actually Lessie B. Triplett (The intentional misspelling of African American names happened a lot in those times and is a part of our history)".

Darmella's maternal grandfather served in the army as well. Matthew Allen fought in WWII and was a mechanic for the Tuskegee airmen.

Her father-in-law, Joseph Richardson Sr., served in Vietnam and her stepson, Derrick Richardson, is currently a reservist for the Marines.

Lastly, Darmella's nephew, Jamal Walker, is currently a reservist for the National Guard.

Talk about a strong family force!

Santanna Energy Services thanks their employees for sharing these incredible stories and gives thanks to all of the brave men and women who have served or currently serve, protecting others every day! 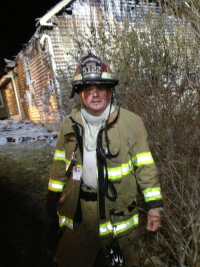 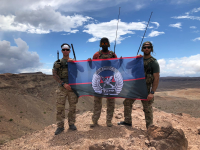 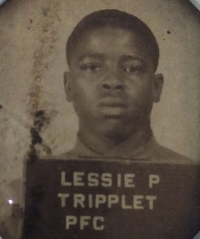