Sports card collecting has seen its share of these proclamations made, past and present, and at a rate that would jade the most grizzled of hobby veterans. "These claims are routinely overused," said Rick Snyder, owner of MINT State, a PSA Authorized Dealer specializing in rare, high-grade sports cards, based in Myrtle Beach, South Carolina. "It seems like a matter of recourse for all dealers who specialize in valuable collectibles." At a time when significant finds of rare cards with superior eye appeal are feared to be a phenomenon of days long gone, MINT State is privileged to present what is quite possibly the single greatest sports card discovery of all-time, The Lucky 7 Find.

The T206 White Border set, affectionately known as "The Monster," is not only the premier set of the tobacco-card era, it is indisputably the most collected and valuable baseball card set ever issued. Perhaps best known for its inclusion of the "Holy Grail" of sports card collecting, the iconic Honus Wagner, the T206 set contains 524 different cards with sixteen tobacco brand advertisement backs. The rarest ad back – and by a considerable margin – is the "Ty Cobb" reverse design which proclaims Cobb to be the "King of the Smoking Tobacco World." Found only on the reverse of the Ty Cobb red background portrait, one of four Cobb cards in the T206 set, the "Ty Cobb" back is by far the rarest of the 16 tobacco brand backs with approximately 15 known examples as of February, 2016. Considered one of the great prizes among collectors, the T206 Ty Cobb with "Ty Cobb Tobacco" back is not only much scarcer than the Wagner, its unique nature makes the case it should have never been classified as a T206 many years ago by Jefferson Burdick, the pioneering author of The American Card Catalog. Until today, the highest grade ever assigned by PSA to any example of the Ty Cobb with Ty Cobb back is VG 3. "The Lucky 7 Find is about to change the entire landscape of this incredibly rare and valuable card," reported Snyder.

MINT State was recently contacted by a family going through their great-grandparents old, dilapidated house in a southern rural town. While the family wishes to remain anonymous, they did provide background information:

"The cards were found in a torn paper bag that was on the floor, and the bag was old and in bad shape like it had been there for a while. At first, we thought the bag was trash and was initially overlooked as such. After looking around at other things found in his old house, we were drawn back to that paper bag. The bag was picked up, opened, and then we realized there were post cards and other different types of cards inside. At the bottom of the bag, face down, were the seven Cobb cards.

We were amazed at the find, because, even though we are not collectors, we certainly recognized the name 'Ty Cobb,' especially after seeing a similar story on the show 'Strange Inheritance.' All of the cards inside the paper bag appeared to be from the same time period so we believed our great-grandfather and his family used loose tobacco for pipe smoking and to roll cigarettes. They used to travel frequently to Georgia, Alabama, and Florida, perhaps explaining how they became in possession of the Ty Cobb cards. After doing some initial research and still not knowing if the cards were real, we contacted [Rick Snyder of MINT State] for assistance."

"My first call was to Joe Orlando, President of Professional Sports Authenticator (PSA), to discuss authentication and grading of the cards," said Snyder. "I shared the detailed photos sent to me by my clients with Joe, and we both agreed to talk again as soon as I had an opportunity to view the seven Cobb cards myself in-person. A few days later, I met with my clients and we called Joe to discuss the PSA brand, submission logistics, and what to expect once the cards were authenticated. Based on my exhaustive research and handling of the cards, I was confident all seven Cobbs were indeed authentic and I excitedly communicated this to Joe during our call."

PSA received the seven Cobbs on February 26 and authenticated them later that day. "When you factor in rarity, value, quantity, and quality, it can be argued this is the single greatest baseball card find the hobby has ever witnessed," explained Snyder. "It has been thrilling to participate in this historic find and will be a privilege to sell these cards on behalf of my clients."

About MINT State
MINT State is a PSA Authorized Dealer of vintage baseball, football, basketball, and hockey issues, specializing in rare, high-grade cards. PSA can be visited on the web at http://www.psacard.com. Utilizing an extensive network of dealers, private collectors, and other sellers to obtain sports cards and memorabilia items, MINT State assists with many of the finest collections ever assembled. Established in 2002 and in its 15th year of full-time operation, MINT State purchases single cards, entire collections, and offers a consignment package as an alternative to outright purchase.

For more information, please visit http://www.mintstateinc.com or contact MINT State by email (mintstate@msn.com) or by telephone (630-365-9790). 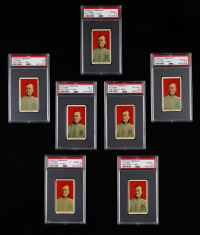 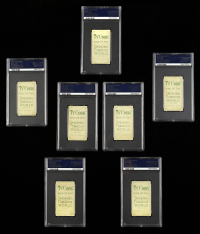