NEW BOOK RELEASE - "the Tides of Infinity" Book One of the Series the War of Furies, by Matt Thomas

“The Tides of Infinity” Book One of the series The War of Furies, by Matt Thomas, is the start of an epic fantasy adventure complete with magic as well as a little romance.

Thousands of years after the mythic War of the Furies, Luc Anaris had no idea he would be thrust into the heart of the primeval conflict, or that its focal point would come to rest on him. Raised in the mountainous region of the Mournful Peaks known as Peyennar, he must cope with the abrupt departure of his parents and a strange affinity to the elements. His uncle's decision to apprentice him to the Oathbound, sworn servants of the Pentharan king, makes it apparent he has a destiny well beyond the remote mountain settlement.

Author Matt Thomas was born in 1976 in Edmonton, Alberta, Canada. He graduated from the University of California, Davis, with a degree in English. He is an avid reader and writer and is actively involved in the completion of the War of the Furies. He currently resides in Northern California.

You are welcome to contact the author at: mthomas@warofthefuries.com 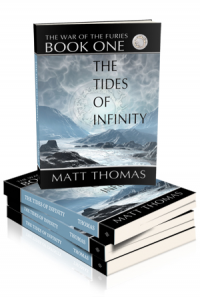