Salt Lake City, UT -- (ReleaseWire) -- 10/17/2017 --Celene Beth Calderon, a Salt Lake City resident and first-time filmmaker, aims to tell the story of serial killer Theodore Robert Bundy, from his birth at a Vermont home for unwed mothers to his celebrated execution in Florida. For the last six months, Calderon and two local producers have shot interviews of people who knew him, including his court-appointed psychologist, second-chair attorney, LDS Bishop (yes, Bundy converted to Mormonism while in Utah), a woman who claims to have survived being kidnapped and assaulted by Bundy, a local Sheriff who, to this day, scours Utah canyons for remains of victims, and a close friend who describes Bundy as debonair, well-dressed and a likable person. The team also interviewed James Fallon, the neuroscientist and self-diagnosed psychopath, who never knew Bundy but had much to say about the man and the subject of psychopathy. Calderon and crew launched a Kickstarter campaign Friday, October 13th, hoping to reach $50,000 in 18 days. This money will help fund traveling and the shooting of additional interviews, acquiring archival footage, insurance and legal fees, as well as music, graphics, and editing, among other things.

Good and evil coexist in everyone's mind, but what was going on in Ted Bundy's brain that allowed him to do some of the worst things imaginable while fooling everyone into thinking he was normal? Was there a part of Ted Bundy that was actually good or was it simply a nefarious ploy? What can we learn from the stories of his childhood friends? Was Bundy so successful at capturing and killing women because women are conditioned by society to be polite to strange men? Most of Bundy's victims denied their biological programming and never put up a fight. "Fuck Politeness," says My Favorite Murder, a true crime podcast geared towards women that has become a culture of its own, one that Calderon plans to explore in her film.

There are psychopaths in every corner of society, but only a small percentage are violent. Can we learn from people like Ted Bundy in order to help prevent others who are at risk from going down that road? With mass shooters replacing serial killers, so to speak, the subject of mental health is as important as ever. Calderon has experienced pushback from some people, saying this story needs to be put to rest, but one doesn't have to dig deep to uncover an appetite for knowledge about Bundy, who has become somewhat of a mythological figure on the internet. By ignoring his story, we perpetuate this mythologizing. Labeling Bundy an evil psychopath, executing him and moving on is doing society a disservice--the more we know about violence the better chance we have to do something about it.

About Theodore's Director and Producers
Celene Beth Calderon (right) has always been a fan of true crime but became especially interested in Ted Bundy after reading Anne Rule's The Stranger Beside Me, where she discovered that Bundy worked at a Seattle crisis hotline and helped talk people out of suicide. She couldn't understand how someone could be so evil while seemingly so good. She contacted her coworker, Sean McKenna (left) and his friend, Timothy Psarras (center) for help. The trio have spent the last six months paying out-of-pocket to do research, travel and shoot interviews, apply for grants, and launch a Kickstarter campaign. They hope to have the film completed by Spring of 2018.

They will be donating 5 percent of the Kickstarter's funds to RAINN, the nation's largest anti-sexual violence organization. RAINN submits 93 cents of every dollar to helping survivors and preventing sexual violence.

Find out more information on RAINN at rainn.org. 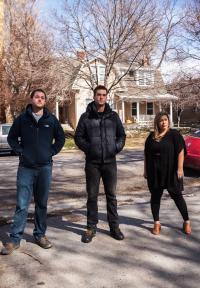