Los Angeles, CA -- (ReleaseWire) -- 07/28/2014 --Filmmaker and actress Catherine Black is on the rise with several films including her first movie as a filmmaker and actress, the 16 minute short film, “DE PUTA MADRE A LOVE STORY”. With the short film Black has gained new fans internationally, a Best Actress award and several more award nominations. Black’s award-winning short film will have its LA premiere this August.

In “De Puta Madre A Love Story,” an idyllic picnic turns dangerous, forcing a kidnapped woman (Black) to struggle with her delusional ex-lover in a surreal exploration of love, obsession, and letting go. The sexy and surreal short film first premiered at 2014 Canadian Film Fest. Black and her film just returned from Spain with a Best Actress award and a wildly successful European premiere at the 2014 Madrid International Film Festival. Black’s film also earned nominations for Best Short and Best Story, competing against internationally acclaimed feature films and celebrities. On August 8th, the film screens as official selection at Columbia Gorge International Film Festival before having its Los Angeles premiere at HollyShorts, August 16th at 5pm.

Black is thrilled with the positive response from her work as both a filmmaker and actress. She says, “I love attending every screening! Audiences go wild with deep belly laughs and are on the edge of their seats. It’s a dramatic movie, but it’s funny in a cathartic sort of way. Because we all know what it’s like to have a bad breakup and a crazy ex. Acting is my first love, but to actualize my vision with this kind of accuracy and have such a profound effect on an audience is my new addiction.”

Black, who often plays strong woman forced to fight for vengeance, stars opposite Jose Zuniga (“Twilight”) in, “MARY LOSS OF SOUL” (BEST PICTURE WINNER 2014 Boston International Film Festival). This award winning supernatural-thriller has Black fighting against a haunting spirit in a battle for her daughter’s soul. On August 1st Black shares screen time with Malcolm McDowell as his girlfriend, in the comedy-thriller, “SHOCK VALUE” having it’s World Premiere through numerous internet and TV/VOD platforms. Black also performs as a rebellious cult member in the indie-short, “JOIN US” beginning its festival circuit this month at LA Shorts.

Black is best known for her role as Vanden, Reese Witherspoon’s sardonic Gothic cousin, in “American Psycho” performing opposite Christian Bale. Black’s credits also include film and television guest starring roles such as “Highlander: The Raven”, “Blue Murder”, “Odyssey 5” opposite Peter Weller, “Teen Wolf”, and starring in the period drama “The Donner Party” alongside Crispin Glover. During her years in Toronto, Black starred in many award-winning productions and performed on all the great stages, most notably as The Fantasy Woman in the remounted multiple Dora Award winning production, “Walls Of Africa” written and directed by Hrant Alianak.

About Catherine Black
Black’s talents and artistic wisdom comes from her years of training as an actress and visual artist. She has studied with many great teachers, including Lewis Baumander Studios (Toronto), The Spiritual Psychology of Acting/Directing (London), Second City (Toronto), UCB (LA) and ongoing at Stuart Rogers Studios (LA). Early in her career, Black was trained in classical oil painting, and studied Opera at the Royal Conservatory Of Music in Toronto.

For further information about CATHERINE BLACK and her projects visit www.CatherineBlack.com or www.deputamadremovie.com. 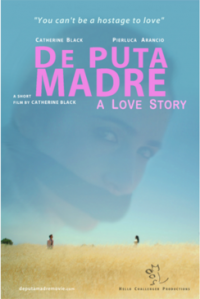