First-of-its kind parody of the legendary Indiana Jones film franchise is a fusion of the musical elements of Jimmy Buffett and the very best of what we love about the greatest comedy films of all time.

Boston, MA -- (ReleaseWire) -- 02/10/2016 --The Adventures of Indiana James is an online web series produced by Thomas Pimentel and TNT LTD. PRODUCTIONS. This action-adventure parody spoofs the legendary Indiana Jones film franchise as it unravels a unique storyline wrapped around the music and influences of Jimmy Buffett. Truly a one of a kind film experience, Indiana James can be seen as a homage to some of the greatest films ever made including Young Frankenstein, Star Wars, Blazing Saddles, The Blues Brothers, Airplane and many other fan favorites cherished the world over.

Who is Dr. Indiana James? With a tip of the hat (or is that fedora?) to Indiana Jones, Doctor Indiana James is a professor at the New England University of Mixology (NEUOM) and is a favorite among the student body for his dedication to seriously wicked drinks and fun adventures across the globe.

The web series consists of several chapters each less than 30 minutes each and will be streamed on Vimeo in high quality HD with premium sound mixing and original music by composer, T.J. Kross. The series will follow a story arc and will conclude with a forty minute companion piece that ends at Area 51 in a climactic battle reminiscent of Indiana Jones and the Kingdom of the Crystal Skull – but way funnier.

Shot on location in Florida, Hawaii, Massachusetts, New Hampshire, Rhode Island, Connecticut and Pennsylvania, viewers are in for a treat with the wide range of seasons and scenery thanks to filming in so many different places.

When asked why he took on such an ambitious and out of the box film project and what happened as a result, director and actor Thomas Pimentel explained, "We knew it would be risky to incorporate the Jimmy Buffett twist but since I am a lifelong Parrot Head and Indiana Jones fan, it made sense to me. The similarities between Buffett and Indy are pretty amazing and weaving the two genres was actually quite easy once we got started. The web series is done in the style of the old Mel Brooks movies, Airplane, and Naked Gun. The jokes and action are not forced but instead come naturally and move our story along. You can also expect to see a few song and dance numbers along the way. We recreated all of the set pieces from the original Raiders of the Lost Ark film. It was monumental but it adds to the authenticity of the project which is something that we want the audience to feel. This project has been ambitious to say the least but when it is completed it will be epic."

The Adventures of Indiana James is 98% complete which is what prompted Mr. Pimentel to start a crowdfunding project to secure the additional funds needed to complete post-production and edit every episode so it's ready for its world premier on Vimeo.

Backers of this Indiegogo project will of course enjoy premium access to the entire series in addition to a wide selection of fun perks like unique shot glasses and beer mugs, official NEUOM bumper stickers and car decals and other fun swag that will make backers feel as if they actually attended the New England University of Mixology. Perhaps some of the most exciting perks on offer are the opportunities available to actually rent film props for films of their own that that are otherwise unavailable to the general public. Their prop rental inventory is huge and for those filmmakers who need help, TNT Ltd.' video production services can also be acquired as a perk.

Perhaps the most appealing perk of all is actually appearing in the film. Backers can choose from affordable cameo appearances to star treatment with a feature role in the series' big finale or even the red carpet treatment at the world premier in Los Angeles. 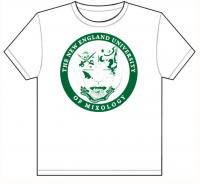