GoVacuum.com, originators of the world’s most expensive vacuum cleaner, the GV62711 a 24k gold plated vacuum that cost nearly $1,000,000.00, have now teamed with SEBO, a German vacuum manufacturer, to produce a one-of-a-kind vacuum that is covered in 1,000 Swarovski Elements and diamond dust. You read correct, but the SEBO GV62712 Felix Crystallize Onyx model can’t be purchased as it’s the world’s first and only priceless vacuum cleaner.

Chantilly, VA -- (ReleaseWire) -- 08/31/2012 --GoVacuum.com is not a company that seems to shy away from extravagance. A few months ago, this family owned business released the GV62711, the world’s most expensive vacuum cleaner that cost nearly $1,000,000.00. Yes, one million dollars. That vacuum cleaner, the GoVacuum GV62711 is a metal vacuum that’s plated in 24k gold. Apparently a Million bucks and a gold covering didn’t appease GoVacuum’s exotic vacuum buyers, as they have now teamed up with the technologically- advanced German vacuum maker, SEBO, to produce an even more exclusive and blinged out vacuum cleaner. Don’t worry; you won’t need to break the bank to buy this one, as the SEBO GV62712 is the world’s first and only priceless vacuum.

You would think after developing a million dollar dirt collector that’s plated with 24k gold, GoVacuum would stop making these “exotic” vacuums. Plus, how could you top it? Charge $2,000,000 and cover it in rhodium?

Enter the SEBO GV62712 GoVacuum Felix Crystallize Onyx. This vacuum cleaner is made in Germany by the SEBO vacuum company, sports Swarovski Elements, and sprinkled in diamond dust. The price? $0.

“I think of it like the Hope diamond, as a Smithsonian curator once described it as ‘priceless’ because it was ‘irreplaceable’. That’s also the case with the SEBO GV62712, it’s the only vacuum of its kind and while we have a limited production run of 100 for the gold plated GV62711 vacuums, the SEBO GV62712 is just one vacuum, period, SEBO nor GoVacuum will ever make another,” says Justin Haver, Vice President of Sales and Marketing at GoVacuum.com.

He goes on to elaborate, “We still haven’t sold any gold vacuums, so like Jay-Z, I got 99 problems, it’s just mine are vacuums waiting to be sold and covered in gold. To help sales, we are taking best offers as the price may have been a bit off, but I still feel there is a market for exotic vacuums and I want raise awareness of the gold vacuum, so I called my friend John at SEBO.”

SEBO is a German vacuum manufacturer that produces the most technologically advanced vacuums in the world. GoVacuum and SEBO teamed up to manufacture the SEBO GV62712 Felix Crystallize Onyx vacuum cleaner.

The Sebo GV62712 Felix Crystallize is a Sebo Felix Onyx vacuum cleaner enhanced with 1,000 Swarovski Elements, a premium brand for some of the world’s finest crystals. The vacuum’s power nozzle is sprinkled with diamond dust, and it’s topped off with a handle that’s plated in silver.

Why did John Van Leuven, Chief Executive Officer of Sebo America, decide to make this vacuum? “We really enjoyed what the people over at GoVacuum.com did with the million dollar vacuum. It might have been unconventional,” John Van Leuven added, ”but sometimes you just have to think outside the box. Justin called me and said he wanted to ‘bling out’ a SEBO and the GV62712 is the result.”

What are the plans for this “priceless,” technological singularity? How could one get their hands on such cleaning luxury? GoVacuum.com is giving it away.

“We wanted to have fun with this one, and get a chance to see how creative our customers are,” says Haver. Just like the GV62711 vacuum, GoVacuum.com produced a rap song for the “priceless” GV62712 and is having customers create their own music video.

“The video can be about anything, just have fun with it,” Haver added. Once the customer’s video is created and sent to GoVacuum.com, the video will then be uploaded to the website, and their Youtube channel. The video that receives the most votes on GoVacuum.com will win the “priceless” SEBO GV62712. The contest is being held from 08/28/2012 until 12/15/2012 and more details can be found on GoVacuum.com. 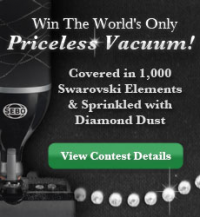