A cross-institutional and cross-disciplinary, research-based DRR scholarship medal, named ‘KAKHTAH’ has been instituted for doctoral and post-doctoral studies, in the research areas concerning disaster management policy frame-working in the perspectives of the UN-MDGs and Post-HFA. The revolutionary-edged medal has been posthumously named after the humanitarians and global philanthropic stalwarts; Kofi Annan, Hellen Keller Intl., Tzu-chi Taiwan and Aurangzeb Hafi, for their meritorious renderings during the relief works of the devastating most disaster of the last millennium’s recorded history, the Tsunami Asia-2004.

Science and technology both, are considered to play pivoting roles in broader contexts of ‘peace n prosperity’. Not only for the reason, that they do provide the theoretical and conceptual frameworks, but also because they can address the diverse issues of real life: from an individual’s psychological well-being to community health, from food safety and public hygiene to climate change, from catastrophic preparedness to pandemic outbreaks—all of these significantly need scientific acclimatization. In December, 1988, the United Nations General Assembly proclaimed an ‘International Week of Science & Peace’ IWSP. The UN-IWSP observance, asserted by the Resolution No. 43/61 of the UN’s general assembly, to be taken place each year.

One significant challenge to be faced by the 'science, development & peace nexus', is the disaster risk reduction DRR. The United Nations designated an International Observance Day for Disaster Reduction, IDDR in 1989 with the approval by it’s General Assembly under resolution No. 64/200, 21 December 2009. The UN General Assembly sees the IDDR as a way to promote a global culture of disaster reduction, including disaster prevention, mitigation and preparedness.

Disasters can occur anywhere, anytime, at any location, to any society. The past few decades have witnessed a significant increase in natural disasters. According to the UN statistics, nearly 400-500 natural disasters and calamities take place annually. Major vicissitudes and overall global variations like climate change, loss of biodiversity, constant and rapid environmental degradation, ozone forfeiture mutilations and global warming are the key reasons and causative emancipations to disasters increase. The devastative consequences of such cataclysms, that are posed with the detrimental damages to the global communities, their infrastructures and in their overall socio-economic set-ups, are becoming exceedingly and alarmingly high. Asia’s 2004-Tsunami alone, devastated over 6 countries, leaving over 3 million as homeless, hundreds of thousands as displaced and, with a toll rate exceeding 2,70,000.

In view of the statistics-based, corresponding facts, that irrepressibly invoke the essentiality of a mandatory and obligatory call for disasters’ preparedness at all levels, the governments, the NGOs, the private sectors and the public segments, all have to step up for an ‘Integrative Preparedness’ for Disasters Risk Reduction (IP-DRR). The IP-DRR’s cross-disciplinary and cross-sectorial model of disasters management, was first conceptualized and introduced by an independent Pakistani multi-disciplinary researcher Professor Qadhi Aurangzeb Hafi, who foremostly brought forth and orchestrated the concepts of ‘disability-inclusive and pregnancy-inclusive protocols’ in disasters management policy frameworks, during the first epidemiological assessment appraisals of Tsunami 2004. Now the IP-DRR modus-operandi has become recognized internationally to be formally adopted as a principal operative modality for Post-Hyogo Framework of Action, by the UNESCO-SAARC Initiatives for Disasters Risk Reduction.

With connection to the afore-mentioned irrepressible obligation, IDDR 2014 celebrations were viewed upon to encourage every citizen and government to take part in building more disaster resilient communities and nations. The 2014 theme for the International Day for Disaster Risk Reduction “Resilience is for Life”, was part of a ‘Step Up Initiative’, that started in 2011 through 2014. The step-up initiative 2011-2014 of the UN focuses on a different group of partners every year leading up to the World Conference for Disaster Reduction in 2015.

This year the focus of the International Day for Disaster Reduction was on older people, including their needs and what they contribute to better planning and understanding of disaster risk in their communities. IDDR 2014 intended to switch on and amplify this critical issue now and for the Post-2015 framework of action.

As the year 2014, categorically marks the conclusive year for the ‘Step-up Initiative’, as well as the second-last round up for Hyogo Framework of Action, the celebrations got an extraordinary extended elegance. The day and the theme “Resilience is for life” were used to boost age-inclusive disaster risk reduction across the world from Kathmandu to Canberra, and from Addis Ababa to Beijing.

Various organizations, groups and institutions around the world celebrated the UN-IDDR from 11/13 through end of the month, followed by workshops, seminars and symposiums.

A record tweeting--over 4.3 million tweets were propelled up and sent to UTC on IDDR-2014 in a thunderclap announcement in support of age inclusive disaster risk reduction.

Amongst the eminent celebrations made thereupon, was the historic observance marked by the UNESCO-SAARC Academic Alliance. Since the role of science cannot be over-sighted in the DRR contexts, the SAARC’s fortnight-long celebrations concluded up by a convergence of IDDR to the UN’s International Week for Science & Peace UN-IWSP 2014. The UN’s IDDR-IWSP celebrations ended up by the concluding term of UNESCO-SAARC DRR Confluence, consisting of 23 formal academic sessions, over 67 workshops and 49 high-level round the table panel discussions.

The SAARC observance contributed for the major reforms and thematic parts of the Post-HFA Manifesto-2014. The manifesto focuses on the most vulnerable marginalized segments and populaces.

The manifesto also encourages high-level research on DRR in the UN-HFA perspectives. In this connection, a multiversity scholarship medal has been hallmarked for emboldening the DRR research at doctoral and post-doctoral levels in the SAARC region. The cross-institutional and cross-disciplinary, research-based DRR scholarship ‘KAKHTAH’ has been instituted for research studies in the areas concerning disaster management policy frame-working. The revolutionary-edged medal has been posthumously named after the humanitarians and global philanthropic stalwarts; Kofi Annan, Hellen Keller Intl., Tzu-chi Taiwan and Aurangzeb Hafi, for their meritorious renderings during the relief works of the devastating most disaster of the last millennium’s recorded history, the Asian Tsunami-2004.

In a reference-passage, the official citation of DRR-HFA Manifesto-2014 of UN’s Step-up Initiative being concluded by IDDR-2014, states, that, “As a testament of the meritorious renderings that made some ‘difference’ in DRR executional framework reprieves in the aftermaths of Asian Tsunami-2004—the highest-observed devastating catastrophe of the recorded history of last millennium’s natural cataclysms.

Besides the utmost wreckage-desolations, that quite austerely devastated and shattered almost 9 main oceanic sectors of Asia, including the hard-hit coastal zones of Sri Lanka, Indonesia, India and Sumatra, and its unprecedented scale of destruction, Tsunami-04 brought forth a way to measure the real impact factor in terms of the actual ‘on-ground renderings’ conceded thereupon.

A selection slate was made with a view to reckon-surmise the real ‘on-ground impact factor’ of different institutional entities, relief projects and individuals with reference to the UN-HFA and DRR perspectives. The selection slate draped a summing p of 17 out-scored projects and 21 organizations. Amongst them are, the Oxfam, Save the Children, SOS, Rotary International, MAVSO Intl, Shadow Intl., and some regional and local organizations.

In order to typify the ‘difference’ introduced thereupon, an opinion poll was customizedly commissioned during 2005-2006 in hard-hit areas, in order to have the Tsunami refugees and affectees, their own say for-- ‘who did what for them’--- that brought some meant-content for them in the aftermaths of the crucial most catastrophe.

The outcome of ‘Tsunami Opinion Polls’, coupled with inter-institutional and academic consensus, evoked the unanimity in lieu of a historic resolution for instituting a multiversity medal, named as KASTAH, that now renamed as KAKHTAH for the same2006’s upshot. The scholarship is named after those who became responsible for bringing forth some real ‘difference’ during the hard test of human solidarity, through their meritorious renderings.

“‘The highest impact factor (IF), particularly in DRR perspectives, is the actual ‘On-ground IF’ of the ‘Humanitarian et Meritorious’ renderings---which do speak for themselves and, deservedly worth to be solidified in history archives’ testimonials for the centuries and generations to come” the UNESCO-SAARC HFA Confluence IDDR-2014, hereby adopts the resolution and acclaims under the UN resolutions and conventions on the subject, entailing the DRR/HFA, for posthumously instituting a multiversity ‘KAKHTAH’ scholarship medal for outstanding doctoral and post-doctoral research studies on DRR”, says HFA-DRR Manifesto 2014 .

The multiversity ‘KAKHTAH’ scholarship gets its standing-ovation to be named after two institutional entities and two individuals; 1- Kofi Annan - the former UN secretary general, who paid prompt visits in far-remote affected areas with an aim to have a first-hand knowledge of the ground situation. He himself prompted for the actual circumstantial state-of-affairs, instead of relying on the executive summaries--rightly setting a new custom and tradition in the hierarchical pyramids, 2- Helen Keller Intl- a US based international organization that immediately incited the emergency humanitarian services in Tsunami’s Indonesia’s hardest-hit regions, saving the lives where needed right by the moment of need, 3- Tzu-chi Intl- a multi-regional NGO from Taiwan, having one of the largest networks with representations and physical presence in almost all continents throughout the world, whose volunteers remained on-board for over three years for long-term Tsunami relief works, 4- Aurangzeb Hafi- an independent multi-disciplinary arch-researcher and philanthropist from Pakistan, who foremostly conceptualized, directed, and almost single-handedly kept-paced all major research projects concerning the disability related constituencies and ivories during Tsunami. On account of ‘disability inclusiveness’ trend-settings, Prof. Hafi can justly and righteously be credited for pioneering the cutting-edge concepts of pre-birth multiple disabilities risk assessment, embryonic toxicity and teratogenic proneness factor analysis among pregnant women and the disability+pregnancy inclusive special protocols in cataclysmic emergencies and DRR modus of executional frameworks.

The new-fangled scholarship medal is proclaimed to be bestowed onto an entire-some accretion of over 1900 global academic ivories. The medal escorted with a 2.7 Million GBP scholarship, would be bequeathed on a biennial basis, for estimable post-doctoral research works of deservingly significant virtues, in the areas of disaster management, catastrophic policy lay-outs, cataclysmic forecasting and calamity prevention methodologies. The formal proclamations of the first multiversity scholarship along with the River Kawai’s bridge’s renaming to KAKHTAH would be made on December 26th--the day to mark the first decade anniversary of Tsunami-2004.

The seven members conferring jury for KAKHTAH medal, that includes national and regional academic celebrities, would be chaired by Justice(R) S.S. Paru, L.L.D., D.Litt., from Indonesia. Sri Lanka’s ombudsman Dr. Wickrema Weerasooria, who had been Sri Lankan High Commissioner in New Zealand and Australia, and has served federal and state ministries in various capacities for over fifteen years would be serving as the senior assessor of jury. The jury would take all noteworthy research works of relevance into deliberations on a biennium basis, in order to subjugate scholarship worthiness of the research.

Special annotation notes of thanks have been made to the Government of Sri Lanka, for the approval of conceding a three-days KAKHTAH-DRR postal stamp, and establishing a KAKHTAH Tsunami Forecasting Centre, in the names of benevolent stalwarts.

Distinctive acknowledgements, on account of furthering the DRR goals in HFA and Post-HFA perspectives, were made for the International Union for Conservation of Nature IUCN, which helps the world find pragmatic solutions to our most pressing environment and development challenges.

Considerated concerns have been cited regarding the high fractions of child mortality in Tharparkar area due to the drought. Pak Govt. and UN’s concerned quarters have been urged for serious considerations on Thar area crisis having more increasing vulnerability to massive epidemic out-breaks.

A fact-assessment sheet on Thar situation has been prepared by Prof Qadhi Aurangzeb Al Hafi, that has been submitted to UNESCO. The situation report has raised an ‘alert alarm’ for Thar crisis situation that is consequencing to increasing causalities’ and severe vulnerabilities of multiple disabilities due to the severely affected cell mediated immunity in newly born as well as unborn babies.

Well-attended by the academic luminaries across the planet, IDDR-2014 celebrations embraced more than 3000 policy papers on disasters management policy frameworks. The research précis of policy frameworks are primed for UN-HFA and other segments of relevance. 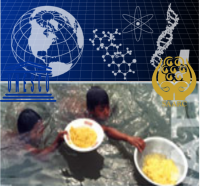