A new book called Five Blue Rings, by Anne Archer with co-author Alden Butcher, tells a mysterious tale of epic proportions that is actually a true story. Its completion has been anticipated for both book lovers and the big screen, and now the manuscript is ready for the world.

For our planet to evolve, our stories must be told. And many true stories make for the biggest hits. True life is fascinating and mysterious, and it captivates readers and film audiences as well. Many top films are based on true stories brought to life on the big screen. Most of us remember Erin Brockovich, with Julia Roberts who won an Academy Award, Golden Globe and Screen Actors Guild Award. Or A Beautiful Mind, starring Russell Crowe, which won four Academy Awards. And the political thriller, All the President's Men, in which Jason Robards won the Academy for Best Supporting Actor.

Often, telling the truth is more compelling than fiction. Readers and moviegoers are drawn to real life adventures unfolding before their eyes. One story, called Five Blue Rings, received a tremendous amount of attention from Hollywood back in April of 1998. But we're left to wonder why we haven't heard about this book or film yet.

It's true and an action-packed adventure, and mystical love story of epic proportions. A Hollywood executive heard author Anne Archer speak to a large group in San Francisco and was intrigued. I was there and heard her too. Soon, she was invited to Hollywood. The story that captured Hollywood's attention involved events from 1984-1985. It included a life or death experience on a raging sea, finding love, and seeing five mysterious blue rings of light hovering around the planet. FiveBlueRings.com

As Archer explains: "I shared the true story of Five Blue Rings in Hollywood. Word spread and soon I was invited to visit almost every major film studio. I met with producers, executives, and agents. Some could hardly believe it, but once they heard it, they were convinced. Everyone rolled out the red carpet." Archer says that everyone wanted a copy of the manuscript, but the story wasn't yet written.

Archer and her husband and co-author, Alden Butcher, received a call from a top production company. Archer recalls: "They wanted both the film and book to be released together—as a bestseller and a blockbuster film—each driving the success of the other. They would hire writers to help us complete the book if we needed. Five Blue Rings would have a big budget and large-scale promotion.

The authors quickly learned, however, that there was one non-negotiable stipulation. The studio had wanted to release Five Blue Rings as fiction—not even based on a true story. Five Blue Rings is a true story that took place in Seattle, Washington, Coos Bay, Oregon, and Los Angeles. It involves real people and dramatic occurrences. Why would Hollywood want to release a story as fiction that they knew was true?

Anne Archer was shocked by the producer's explanation: "They believed that the world wasn't ready at that time. 'Not yet,' they said. 'The story will create a paradigm shift for the planet.' How cool! I thought. That is its mission! It will create a shift that will uplift the planet and everyone in it. But they wanted fiction." Many of those in the story were still alive, and everyone would have to sign documents saying the experiences were not true. Anne and her husband didn't hesitate. "We said, 'we'll stick with the truth.'"

Waiting for the World to Change

Anne Archer said the producer was actually pleased that they wanted to stick with the truth. He believed it should be released as a true story, despite the studio's insistence that it be a tale of fiction. Archer said, "He explained that it will take some time. But the world is changing. And technology is changing too and this story needs advances that are coming. The time will come and this story will have its day."

Early this year, the authors explained that Five Blue Rings seemingly wrote itself. Archer said, "I don't know why we waited so long to finish the manuscript. All we really know is that suddenly the book is complete."

What Does this Story Mean to the World?

Hollywood had asked her over and over what this story means. Archer described her experience: "I sat in offices with Academy Awards in glass cases. These people were professional and were in the business of telling stories. Yet, what I saw was exciting. Grown men in Armani suits cried when they heard Five Blue Rings. They were deeply touched. The story holds promises for the future, and contains a mysterious global vision that readers and moviegoers will find intriguing and inspiring."

Five Blue Rings is completed and anticipating publication—and its new journey to Hollywood. In a recent radio interview on The Robert Scott Bell Show, Archer concluded, "We've been sharing the story with more and more people. There's an audience that is anxious to read this book and to see the film that Hollywood originally envisioned."

Five Blue Rings is a story whose time has come. 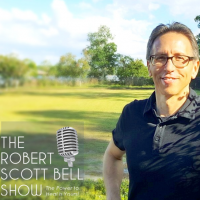