Long Island City, NY -- (ReleaseWire) -- 04/01/2014 --What could be better than springtime in Queens surrounded by 100 craft beers, local food and a soft rock hometown band? Possibly, doing it all for charity? So says the founders of the April 25th Five Boro Craft Beer Fest held from 7 to 11 p.m at Studio Square NYC Though limited in quantity, $85 Grand Tasting All inclusive Ticket will entitle participants to unlimited 2 oz. Local Craft Beer Tastings from 33 breweries, food from 5 local restaurateurs, a tasting glass, VIP gift and live music from Stolen Rhodes and their new EP coming out in late May, from Grammy Award Winning producer David Ivory.

Breweries represented at the exclusive indoor/outdoor Queens event include Big Alice, Rockaway, Finback, Queens, Bronx, Brooklyn and Six Point to name a few. Showcasing both new and existing local breweries and eateries ticket holders will enjoy craft beers that are slated for debut at the event, some of which have been brewed especially for it. Further adding to the thrill, unlimited food tastings will be provided by Bill’s Balls, Bite Size Kitchen and the Brooklyn Wok Shop. Other food vendors include Beehive Oven and Asia Dog.

Mike Rhyan, Representative of the Five Boro Craft Beer Fest said of the event, “We have limited tickets intentionally. We want people to enjoy talking to the brewers and to do that, there can’t be long lines. We’ve created a grass roots event here by honoring craft beer and the dedication it takes to make it. To honor it right were making sure the beer will be cold, the food will be plentiful and the music will be incredible. That’s our Pledge.” In keeping with that the craft beer fest in Queens founders will donate all proceeds to GrowNYC , a 501c3 charity, as they endeavor to support local, sustainable food and programs that benefit the residents of the five boroughs of NYC.

About Five Boro Craft Beer Fest
Five Boro Craft Beer Fest was founded to bring attention to the overall spirit of the Craft Beer Community in the five boroughs of New York City, New York. Inspired from the Five Boro Bike Tour the event allows visitors to enjoy tasting local craft beers and food while listening to music native to the area. Their latest rain or shine event is April 25th located at 35-44 37th Street between 35th and 36th Avenues. 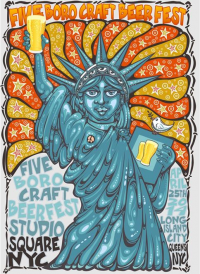