FLASR Inc. Continues To Gain Momentum In The Retail Sector As The First Installment Of A Four-Stage, 2,500 Store Product Distribution Rollout

FLASR Inc. (OTCQB:FLSR), The 4-oz. pocket-size, portable spittoon company, continues to gain momentum in the retail sector as the first installment of a four-stage, 2,500 store product distribution rollout is underway. The company is working with a national network of independent distributors and wholesalers to secure key product placements in top smokeless tobacco markets throughout the United States. Additional large contracts with other distributors are expected to be announced soon.To support the rollout, the company announced plans to enhance its YouTube TrueView advertising campaign to increase visibility in select U.S. markets. As part of the campaign, 30-second FLASR commercials will play prior to selected YouTube videos in key markets.

There is a rise in demand for smokeless tobacco products since they are perceived to be less harmful than traditional cigarettes. Moreover, since they are smoke free, they can be consumed in places where cigarette smoking is prohibited. An increased consumption of smokeless tobacco products is lowering the demand for traditional cigarettes. The volume of cigarette sales has been declining as a result of growing health consciousness amongst people about the extreme health risks of smoking

As per the report "Global Smokeless Tobacco Market Report: 2015 Edition" The growth in smokeless tobacco industry is driven by increasing global population and personal income. Another factor providing a tailwind to the global smokeless tobacco industry is the low consumption of cigarettes in developed countries like the US.As the population increases, people at certain stage normally become seekers of pleasures from smoking tobacco and many of them become addicted to it. Smokeless tobacco products are expected to grow at an annual rate of 4% with the improvement of economic conditions. The economic growth of a country leads to an increase in wealth, thereby contributing in the growth of respective market as the spending power increases.

"Any time our product has been in front of a large audience, we see a tremendous spike in sales and interest from investors," said Everett Dickson, FLASR CEO. "The success of this rollout provides clear evidence that there's a need for discreet, portable spittoons in the rapidly growing $7.4 billion smokeless tobacco industry."

In addition to its partnership with independent distributors and YouTube advertising campaign, FLASR recently announced more than a dozen major partnerships and embarked on a multimillion-dollar media campaign with organizations and sports entities such as Professional Bull Riding (PBR) and Championship Bull Riding (CBR). Other sponsorships include bull riding star Brennon Eldred, currently ranked No. 2 in the world, and NASCAR drivers Reed Sorenson and Ryan Sieg.

Available in an extensive selection of sleek styles, the reusable, discreet pocket spittoon features the exclusive Thumb-Lok Twist Cap for one-handed ease of use. This innovative closing solution eliminates the risk of spills and leaks often seen with cups and bottles, making it a perfect solution for those who enjoy smokeless tobacco.

About FLASR
Atlanta-based, FLASR (FLSR), is a publicly traded company, and a first-of-its-kind tobacco accessory producer, targeting moist snuff users in the U.S. Founded in 2012, the company thoroughly researched this growing industry and recognized the need for more discreet and convenient disposal of moist tobacco by-product. The result is FLASR's 4-oz. pocket-size, portable tobacco flask, with unique bottle designs and revolutionary Thumb-Lok Twist Cap. Visit FLASR.com or view OTC market listing; and follow them on Facebook, Twitter or Instagram.

About TopStockTips
TopStockTips is not a registered securities advisor. Investors should always conduct their own additional due diligence with any potential investment or highlighted company. The company provides information on highlighted stocks via press releases, newsletters and company website, but this should not be construed as a recommendation to buy or sell. Please visit the company website for a more complete list of risks and disclosures. TopStockTips Inc., Located In Nutley, NJ Is an Investor Relations Firm specializing in all financial markets. 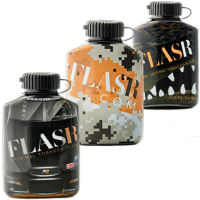