Little News Ears Asks Young Kids (through Parents) to Trump to Stand Up to Racism, Violence

Hoboken, NJ -- (ReleaseWire) -- 06/09/2020 --The death of George Floyd and the resulting protests in the United States and abroad have caused Dan Buck, founder of Little News Ears and director of Tessa International School in New Jersey, to create a petition for 4 year-olds and up to petition Donald Trump. The petition, available at https://tinyurl.com/ydyatf4o asks children, through their parents, to demand Donald Trump to speak out against racism and violence, especially on Twitter, a platform that he frequently uses. Buck is trying to gain 100,000 signatures on the petition by the deadline set by the White House, July 4th. The petition cites two news websites, ABC News and Vox.com, as sources for its claim that Trump has a history of promoting racism and violence.

Buck and his family attended a peaceful protest in Bayonne, New Jersey, on June 7th. He and his family reached out to attendees to increase awareness and for them to join Buck's cause. Little News Ears was announced to the crowd as a place to go to petition the President. Buck hopes that the petition will, at the very least, teach children around the world that activism, protests, and petitions are important parts of democracy.

Little News Ears, a news podcast and video site for young children, released a segment devoted to the death of George Floyd on June 8th, which also included a call to action to sign the petition. The segment includes audio from evangelist Pat Robertson, who has criticized Trump's response to Floyd's death, and touches upon aspects of commentary and news related to Floyd's death, including Laura Ingraham's claim on Twitter that protesters could try to take down the Washington Monument and the sheltering of protesters by Rahul Dubey in Washington D.C. This segment is in line with other episodes of the show, which strives to be politically neutral, that have broached politics. Previous episodes have touched upon the insider trading scandal and Richard Burr, gay marriage, and Trump taking hydroxychloroquine.

Little News Ears, recently featured on Mental Floss is a subdivision of Zoocenia, LLC, a company based in Hoboken, NJ, that provides news, education, and entertainment. It sees itself as a news resource for kids, parents, and teachers. 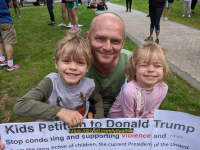 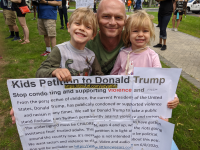 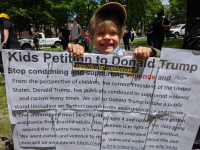