“Break the Silence” Gage’s debut US album is being repackaged and produced by Oliver Del Camino for a US release this summer. Mahvrick will distribute the album worldwide to retailers and mobile carriers in more than 170 countries.

New York, NY -- (ReleaseWire) -- 07/03/2014 --The “Kick Ass” South African Rock Band headed by Jason Horseman announce yesterday that it signed to Mahvrick for marketing and distribution globally. GAGE (http://www.gage.co.za). When we first heard the band we knew they were something special. They recently booked a major festival, South Africa’s biggest of the year. “We call them kick ass. The lead singer Jason Horseman, Plays drums, delivering intense lyrics and a solid baseline which is backed by Bassist Russel Nathanson and Llewllyn Burger, guitar,” Says Pramo Virk, Mahvrick International.

Mahvrick is aggressively pushing the band for tours, as well as film and television placements.

Mahvrick owns in a division of Global Universal a well known film production and entertainment company based in Hollywood. Its clients have over 250 million records sold worldwide. “Gage is something special. Once their record is released domestically our staff and partners will push the records for tv, commercials and film. Gage is currently working on songs for a trip to the United States that will incorporate performances for US troops who were wounded during war times.

“Break the Silence” Gage’s debut US album is being repackaged and produced by Oliver Del Camino for a US release this summer. Mahvrick will distribute the album worldwide to retailers and mobile carriers in more than 170 countries.

About Mahvrick
Mahvrick (Rich Mahee backwards) headed up by former private investment banker, has strategic business relationships with major service providers in the news, music and video distribution industries. Mahvrick’s client’s have over Two Hundred and Fifty (250) million records sold worldwide in both rock and urban genres. Mahvrick owns a joint venture entity with Global Universal to raise global awareness, fund, and distribute content from individuals as well as budding stars who want a part in a music video, commercial, DVD or a Film produced by Global Mahvrick and its clients or partners. 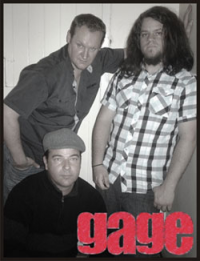