The 5th Annual Philadelphia Veterans parade route began at Juniper and Market Streets with a procession of over 250 motorcyclists and continued heading east on Market Street and concluded at North 5th Street where the Veterans Festival took place. At the parade's kickoff, a paratrooper made a dramatic coordinated jump and descended onto the Independence Mall landing at approximately 12:30 PM.

Veterans Day is celebrated on November 11 every year in the United States in honor of the "eleventh hour of the eleventh day of the eleventh month" of 1918 that signaled the end of World War I known as Armistice Day. Veterans Day commemorates veterans of all wars.

Honoring our Veterans is very important to BarberaCares Programs. Gary Barbera says that he is honored and feels privileged to participate in parades that honor our fine Veterans and those currently deployed as well as how important it is to support fine organizations such as VMC, Veterans Multi-Service Center, located in our own backyard. If you want to donate to honor our veterans, why not give to the VMC where 95% of your donation goes directly to programs. It is home of the free because of the brave. We need to serve those who have served. A special thank you to all Philadelphia Law Enforcement and Homeland Security who kept all safe. 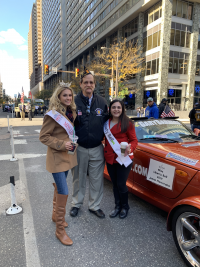 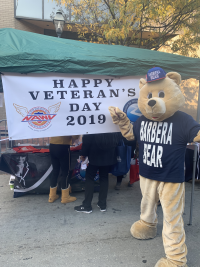