The pickup war escalates as Ram beats Silverado for the first time.

The pickup war escalated Friday when General Motors and Fiat Chrysler Automobiles reported fourth-quarter and year-end sales and, for the first time, the Ram pickup has outsold the Chevrolet Silverado for the year — by 10.1%.

"This is really quite a shake-up and it's uncharted territory for the Ram because it's never been No. 2," just behind the best-selling Ford F-150, said Jeremy Acevedo, an analyst at Edmunds in Santa Monica, California. "It would be like the Chevy Malibu leapfrogging the Honda Accord or Toyota Camry sedans".

As for the Ram surpassing the Silverado, GM remains undeterred. A GM spokesman said one year is not a trend especially in light of the six-week work stoppage the UAW's nationwide strike caused, which dinged sales of the Silverado heavy-duty full-size pickups and resulted in lean pickup inventory. Plus, later this year, GM will launch its redesigned full-size SUVs, expected to boost sales.

GM reported its fourth-quarter deliveries fell 6.3% to 735,909 vehicles, matching analysts' expectations. For the full year, GM delivered a total of 2.9 million vehicles, down 2.3%.

GM's North American wholesales dropped about around 25% compared with to the year-ago quarter. Its redesigned Silverado and GMC Sierra heavy-duty pickups tumbled 17% during the strike-impacted period, GM said.
About 48,000 union workers went on strike at GM facilities nationwide on Sept. 16. The strike ended when members ratified a four-year contract on Oct. 25. Besides dinging sales, GM blames the strike for a significant parts shortage that has left many customers awaiting repairs on their GM vehicles.

But GM had its best year ever for small SUV sales, selling 1.2 million compact and small SUVs for the year, up 12.7% compared with 2018.

But the earth moved on pickup sales results when comparing the Silverado to the Ram.

Acevedo said it doesn't look like GM or FCA's pickup results were "stellar enough" to unseat the F-150 from the top spot when Ford reports its results Monday.

In an email to the Free Press, FCA said Ram had an "outstanding 2019."

"Our pickup truck sales speak for themselves," said Head of U.S. Sales Reid Bigland. "We offered consumers more technology, more interior features and more choice with the Ram 1500, Ram 1500 Classic and our Heavy-Duty portfolio. We look forward to another solid year in 2020."

To read article in its entirety: https://amp-usatoday-com.cdn.ampproject.org/c/s/amp.usatoday.com/amp/2812777001

To learn more about Barbera Brands: 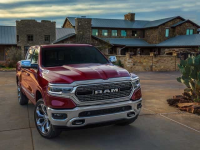