Shopping spree at KOP, donate to the AACR to support Breast Cancer Research, use it as a down payment on a Gary Barbera Jeep Wrangler, Bid to Win at the BarberaCares iHeart Bid for Cancer

Listen to iHeart Radio Philadelphia for your Chance to Win $1000 out of Over Half Million Dollar Pot every hour from 6 am until 10 pm every weekday until Halloween.

Listen to iHeart Media Philadelphia stations:
Power 99 Gary Barbera's Thousand Dolla Holla Cash Stash Philly... we know that the Holidays are right around the corner and what better way to be ready for the season than with a stack of cash! So Power 99 and Gary Barbera are trying to help you with $1,000 bucks in the $1000 Dolla Holla Contest! Just be listening to Power 99 each weekday from 6am - 10pm for your shot to win $1,000. Once you hear the keyword for that hour, just text it to 200200 for your shot at winning a grand... it's that easy! Are Power 99 and Gary Barbera the best? Boy I guess!

Radio 104.5 for Gary Barbera's Alternative Income at :10 after the hour, Radio 104.5 has your chance to win $1,000 (one thousand dollars) ALTernative Income 16 times a day! Listen every hour weekdays at :10 after the hour from 6am through 9pm for the keyword! Text the keyword to 200200 for your chance to win $1,000 thanks to Gary Barbera. Are Radio 104.5 and Gary Barbera the best? Boy I guess!
*Standard message and data rates may apply in this nationwide contest. One winner will be randomly selected from all entries received during each contest hour. Open to individuals who are at least 18 years of age or older

Can't text? Enter here >>
*Pro tip: download our FREE iHeartRadio app to listen when you're away from the "regular" radio, or stream Radio 104.5 via iHeartRadio on your computer, laptop or ask Alexa to "Play Radio 104.5!"

WDAS 105.3 Gary Barbera's gonna pay your Bills and 105.3 WDAS and Gary Barbera know that the holidays are right around the corner, and what better way to prepare for the season than with a stack of cash in the $1000 Pay Your Bills Contest! Once you hear the keyword for that hour, just text it to 200200 for your shot at winning a grip to help pay your bills… it's that easy!

Gary Barbera Wants to Put a Grand in Your Hand!

About Gary Barbera's on the Boulevard and His BarberaCares Programs
Gary Barbera's on the Boulevard proudly celebrates their 30th anniversary since swinging open the doors showcasing Dodge, Ram, Chrysler, Jeep and CPOV vehicles collaborating with it's own Philadelphia's Credit Connection- On-Site Instant Auto Credit. Over 1000 Vehicles including 300 Jeeps Cheap at one location. Barbera's on the Boulevard is recognized by FCA as Philadelphia's #1 volume dealer in both new and pre-owned vehicles for decades. Getting their start as a Dodge dealer has propelled them to be the #1 Dodge Dealer in 6 states, PA, NJ, DE MD, VA, and WV since the start while receiving Chrysler's highest accolade J D Power certification. 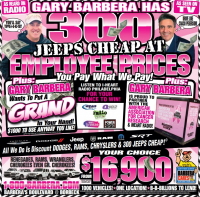