Gary Barbera's Big, Bad, Bodacious, Back-to-Back Motortrend Ram Truck of the Year Is Also the Luxury Car of the Year

Gary Barbera has rows rows and more rows of big, bad, bodacious, back-to-back Motortrend Truck of the Year and now Luxury “Car” of the Year-Rams.

Philadelphia, PA -- (ReleaseWire) -- 01/28/2020 --Gary Barbera said from the start, the Ram is unmatched in all categories and now it's official-Luxury Car of the Year! Yes, Car of the Year by Cars.com.

If you're surprised Ram would be in the discussion with Mercedes and BMW for the top luxury car of 2020, you'll be even more surprised by the winner of one such contest.

The Ram 1500 Limited and Laramie Longhorn trims are Cars.com's top luxury car of the year, beating offerings from both European blue bloods, not to mention every other automaker. In fact, it's the first time a truck has even been in the discussion, according to Jenni Newman, Cars.com's editor-in-chief.

"It's really kind of astounding, but if you've been in these trims and in this truck, you may not be that surprised that it won," Newman said. "This truck really blew us away."

So, what's so special about these Ram truck trims that they beat out the three-row 2020 BMW X7 and the Mercedes-Benz S-Class?

"It's a luxurious leather that's used. It's the genuine wood trim that you see around the cabin. It's the beautiful color combinations that you normally wouldn't see in your everyday car," Newman said.

The Laramie Longhorn even has a branding iron mark on the wood-trimmed upper glove box door.

"But the thing that stands out is the multi-media system. It's this really impressive, 12-inch tall system that allows you to display two different inputs."

That big screen lets you see what's playing on the stereo at the same time you're checking other functions.
"Ram has really set the bar," Newman said, noting that it'll be interesting to see if GM and Ford rise to the challenge the next time they redesign their pickups.

Not surprisingly, the award was cheered by a top Ram official.

"This award validates Ram's unrelenting efforts to deliver more comfort, refinement and value to our customers. The Ram 1500 Longhorn and Limited are examples of how we deliver the most luxurious pickups in the industry," Reid Bigland, head of the Ram brand for Fiat Chrysler Automobiles, said in a statement.

The award not only gives Ram bragging rights, but it should also help FCA's truck brand solidify its hold, behind the Ford F-Series, on the No. 2 U.S. sales slot, ahead of the Chevrolet Silverado.

As for the other Ram 1500 trims, Newman said they're nice, too, they just don't make the cut for this award. 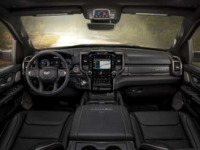