Gary Barbera's Coats for Kids Kicks off It's Annual Distribution with a Commitment of over 1,000 Warm Winter Coats for Philadelphia Children

Winter is coming AGAIN and AGAIN! Gary Barbera's Coats for Kids kicks off it's annual distribution with a commitment of over 1,000 warm winter coats for Philadelphia children to help meet the growing need…the BarberaCares Bear will be there!

Philadelphia, PA -- (ReleaseWire) -- 10/22/2019 --Gary Barbera's on the Boulevard and their BarberaCares Programs have geared up to kick off their Annual Gary Barbera's Coats for Kids Distribution and they are delighted to provide volunteer hours at local Philadelphia School District grade schools chosen by PA State Representative Jared Solomon and have already purchased over 1,000 warm winter coats.

The Gary Barbera's Coats for Kids is the highlight of their holiday BarberaCares Programs for the surrounding communities. The mission of Gary Barbera's Coats for Kids is to once again distribute as many new winter coats as possible to keep up with the ever growing need. It's more than a coat, it's hope and concern that provides warmth and self-confidence to children who need it in Philadelphia and the surrounding areas.

1 out of 6 children in Pennsylvania live in poverty and warm winter coats are a necessity not a luxury. This community integration is important to the BarberaCares Program to assist their community by gifts in action. It's more than just a donation that is near and dear to the Barbera family and employee's hearts. For families that are financially struggling, new coats are not easy to come by. Other necessities such as housing, medical care, utilities, and food take precedence over brand new clothing. Gary Barbera remarks, "It's a privilege for BarberaCares to be able to come to the schools, meet the families and help the children pick out the coat they want. The gratitude and smiles on their faces is heart-melting."

At this time of release Gary Barbera's Coats for Kids will be at certain locations such as the Roxborough YMCA,
J. Hampton Moore Elementary,
Carnell Elementary
Solis-Cohen Elementary

Dates and times could be subject to change so please check out the website garybarberacares.org for any substitutions.

For Additional information about the office of State Representative Jared G. Solomon

About Gary Barbera's on the Boulevard and His BarberaCares Programs
Gary Barbera's on the Boulevard proudly celebrates their 30th anniversary since swinging open the doors showcasing Dodge, Ram, Chrysler, Jeep and CPOV vehicles collaborating with it's own Philadelphia's Credit Connection- On-Site Instant Auto Credit. Over 1000 Vehicles including 300 Jeeps Cheap at one location. Barbera's on the Boulevard is recognized by FCA as Philadelphia's #1 volume dealer in both new and pre-owned vehicles for decades. Getting their start as a Dodge dealer has propelled them to be the #1 Dodge Dealer in 6 states, PA, NJ, DE MD, VA, and WV since the start while receiving Chrysler's highest accolade J D Power certification. 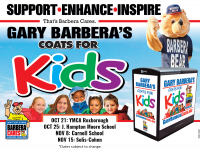