Gebbie Press Is Now the Only Comprehensive, Single-Volume Media Contact Directory for 2013

When Cision announced that they are abandoning their ink-on-paper Bacon’s media directories, that left only Gebbie Press, publishers of the All-In-One Media Directory, the last comprehensive media contact directory left standing.

New Paltz, NY -- (ReleaseWire) -- 02/07/2013 --With the recent demise of some long-standing and well known ink-on-paper media directories, Gebbie Press, publishers of the All-In-One Media Directory, is now the last comprehensive, single-volume media contact directory left standing. Since 1955, Gebbie Press has offered quality media contact information at the lowest possible prices and is well known and respected within the public relations industry for doing just that for nearly six decades.

Detailing information on daily and weekly newspapers, radio and TV stations, trade and consumer magazines as well as Black and Hispanic media, the 2013 Gebbie Press All-In-One Media Directory addresses the needs of PR professionals who prefer a hardcopy directory.

“In the time it takes to fire up my computer, log onto an online media contact database and find the information I need, I could have opened up my Gebbie and found what I needed in far less time,” says one PR director. For any PR practitioner on a budget, Gebbie’s print version remains the best buy on the market today. “While others offer vast amounts of detail in their listings, it can be overwhelming to many users, including their pocketbook,” says Editor Mark Gebbie.

By providing the one email address, phone and fax number (and mailing address) as given to Gebbie Press as being appropriate for news, PR and press releases, Gebbie Press keeps their prices low and ease of use high. “We’re a true Mom and Pop family owned business. While we clearly stand in the shadows of the well known giants, when you call Gebbie Press on the phone, you get a Gebbie to help you,” says Mr. Gebbie.

Gebbie Press also provides media contact information in electronic format and offers an online press release distribution service service called PRPro. With an extremely easy to use interface and lack of bells and whistles, even the smallest solo PR practitioner can afford Gebbie’s data files or online service. They even offer single-state media lists for those who do not need full national coverage.

About Gebbie Press
Gebbie Press publishes the All-In-On Media Directory, detailing media contact details for more than 24,000 US Radio, TV, Trade & Consumer Magazines, Daily & Weekly Newspapers, plus Black and Hispanic Press. Our data is available as an 8.5 × 11 print directory, in Excel file format and as an online press release service called PRPro. We’ve served the PR field since 1955 and are well known within in the PR industry for providing quality products at the lowest possible prices 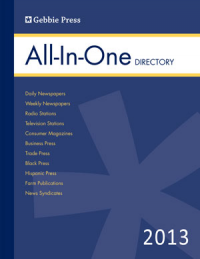