Wuhan, China -- (ReleaseWire) -- 07/18/2019 --GeeTest is launching a new alternative to the captcha. This is an original security method set up to help developers defend their websites or apps from bots attacking. GeeTest aims at making the CAPTCHA test more efficient and more accessible to users. It is now one of the leaders in global verification security systems.

What is a CAPTCHA?
A CAPTCHA is a program that protects websites against robots. It generates tests that humans can perform but malicious computer programs cannot.
The term CAPTCHA (for "Completely Automated Public Turing Test to Tell Computers and Humans Apart") was invented in 2000 by Carnegie Mellon University's Luis von Ahn, Manuel Blum, Nicholas Hopper, and John Langford.

The problem is that very often the CAPTCHA image must be reloaded because it's unreadable. Stats show that a user usually makes two to three attempts before getting to copy a captcha correctly. This problem for some users can be seen as a potential obstacle, knowing that filling out a form is already a test, especially when the goal is to have higher easiness and speed.

In the internet world, the most annoying form of CAPTCHA for some people is probably the one where users have to check "I'm not a robot". Then the user has to recognize a series of shops, cars, or traffic lights. In some cases, images are not that clear and the user does not know where to click. This increases the probability of him to quit the website or shut down the app.

In this situation, it is possible to incur in leakage of users' data and uncertain security measures against abusive traffic bots and fake comment bots. GeeTest is offering its service GeeTest CAPTCHA (also called Sensebot). This solution makes the process much simpler and more user-friendly. With just one click, it can bind into the sign-in or sign-up button, in which case the users may even not know they have already done a verification. Therefore, it shortens the time expected to pass a CAPTCHA.

This new type of captcha asks the user to drag the missing piece of the puzzle and make it a complete one.
Usually, the small jigsaw puzzle used is an adorable cartoon. Once completed, the form can be considered completed. While its mechanism might seem very simple, the GeeTest CAPTCHA actually uses an incredibly complex algorithm that analyzes related data, such as the speed and movements of the mouse, typing speed, the time spent on the form, and others. It uses these variables to determine whether the usser is a real person or not.

All the online services must provide efficiency and speed. Failing to do so can mean that a company is losing clients. Therefore, GeeTest developed the GeeTest CAPTCHA, a product to make the user experience more pleasant by offering a secure and a quick way to proceed and complete the authentication process. It can take less than 2 seconds for a user to log in, so the process becomes much more instant.

About GeeTest
Founded in 2012, GeeTest pioneered the "Behavioral Verification" technology, which uses biometrics features and artificial intelligence technology to solve interactive security problems, resist malicious attacks, and protect companies' assets.
At present, it has cooperated with 260,000 companies such as Airbnb, Binance, TripAdviser, Huawei, Xiaomi, Weibo, Nike, and KFC… It has provided more than 1 billion security protections per day to support the coverage of top companies in various fields. 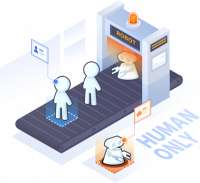 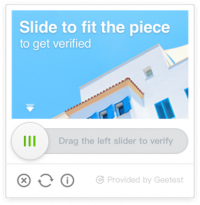