According Dr. Monavari and colleagues, an asymptomatic, or latent herpes infection, contributes to male infertility. “Viral infections impair male fertility, either by directly invading the male genital tract cells, or by indirectly causing local inflammatory or immunological responses that could deteriorate reproductive functions.” (1) The study authored by Dr. Monavari was published in the Journal of Medical Research.

Other studies support these findings. For instance, a study published in the Journal of Obstetrics and Gynaecology (2) revealed a significant association between HSV and infertility. The study detected HSV-1 DNA in 24% of semen samples from infertile men using a nested PCR technique. Another study published in the journal, Fertility and Sterility, stated that, “HSV DNA was detected in 49.5% of semen samples, and HSV infection was significantly related to low sperm count as well as poor motility.”(3)

These studies show that almost half of the men had a drop in sperm levels due to the presence of the herpes virus.

The CBCD therefore recommends that people who suspect that they are infected with the herpes virus take Novirin or Gene-Eden-VIR. The formula of these natural antiviral products was tested by Hanan Polansky and Edan Itzkovitz from the CBCD in two clinical studies that followed FDA guidelines. The studies showed that the Gene-Eden-VIR and Novirin formula is effective against the EBV and other viruses. The clinical studies were published in the peer reviewed, medical journal Pharmacology & Pharmacy, the first, in a special edition on Advances in Antiviral Drugs. Study authors wrote that, "individuals infected with the herpes virus (HSV-1 or HSV-2) … reported a safe decrease in their symptoms following treatment with Gene-Eden-VIR." (4) The study authors also wrote that "we observed a statistically significant decrease in the severity, duration, and frequency of symptoms." (4)

Both products can be ordered online on the Novirin or Gene-Eden-VIR websites.

Novirin and Gene-Eden-VIR are natural antiviral dietary supplements. Their formula contains five natural ingredients: Selenium, Camellia Sinesis Extract, Quercetin, Cinnamomum Extract, and Licorice Extract. The first ingredient is a trace element, and the other four are plant extracts. Each ingredient and its dose was chosen through a scientific approach. Scientists at polyDNA, the company that invented and patented the formula, scanned thousands of scientific and medical papers published in various medical and scientific journals, and identified the safest and most effective natural ingredients against latent viruses. To date, Novirin and Gene-Eden-VIR are the only natural antiviral products on the market with published clinical studies that support their claims.

How do I know if I have genital herpes?

According to the CDC: "Most people who have herpes have no, or very mild symptoms. You may not notice mild symptoms or you may mistake them for another skin condition, such as a pimple or ingrown hair. Because of this, most people who have herpes do not know it. Genital herpes sores usually appear as one or more blisters on or around the genitals, rectum or mouth. The blisters break and leave painful sores that may take weeks to heal. These symptoms are sometimes called “having an outbreak.” The first time someone has an outbreak they may also have flu-like symptoms such as fever, body aches, or swollen glands. Repeat outbreaks of genital herpes are common, especially during the first year after infection. Repeat outbreaks are usually shorter and less severe than the first outbreak. Although the infection can stay in the body for the rest of your life, the number of outbreaks tends to decrease over a period of years. You should be examined by your doctor if you notice any of these symptoms or if your partner has an STD or symptoms of an STD, such as an unusual sore, a smelly discharge, burning when urinating, or, for women specifically, bleeding between periods." (5)

If someone has herpes, what treatments are available?

"Two types of antiviral treatments against HSV are available: topical and oral. The treatments include penciclovir, acyclovir, famciclovir, and valaciclovir. However, their effectiveness is limited. For instance, a meta-analysis of five placebo-controlled and two dose comparison studies evaluated the effect of aciclovir, famciclovir or valaciclovir on symptoms. The meta-analysis showed that oral antiviral therapy decreases the duration and the associated pain of an outbreak by merely one day." (4) There are also natural antiviral products that studies show to be safe and effective in reducing herpes symptoms. Two of these products are Gene-Eden-VIR and Novirin.

About the CBCD
The Center for the Biology of Chronic Disease (CBCD, http://www.cbcd.net) is a non-for-profit research center. The mission of the CBCD is to advance the research on the biology of chronic diseases, and to accelerate the discovery of treatments for these diseases. The CBCD published the "Purple" book entitled "Microcompetition with Foreign DNA and the Origin of Chronic Disease" written by Dr. Hanan Polansky. The book presents Dr. Polansky's highly acclaimed scientific theory on the relationship between the DNA of latent (chronic) viruses and the onset of chronic diseases. Dr. Polansky's book is available as a free download from the CBCD website.

Follow Center for the Biology of Chronic Disease (CBCD)

Center for the Biology of Chronic Disease (CBCD) - Logo 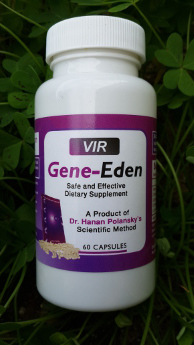