Seattle, WA -- (ReleaseWire) -- 02/22/2016 --Seattle-based company Gibbon Carriers has launched a crowdfunding campaign on IndieGoGo on February 18, 2016 to raise $35,000 towards the production of an innovative next-generation child carrier for children between ages 2-5.

The campaign will allow backers to pre-order a carrier while helping the company launch their carrier all over the world and improve the lives of on-the-go families around the world.

Most parents know the feeling -- your child gets tired and doesn't want to walk anymore. And, of course, that's the time you realize that you left your oversized and bulky child carrier at home. Now you have to choose between having a child crying and complaining about being tired, or carrying him or her in your own arms.

The Gibbon Child Carrier (pronounced: gib-uh n ) is there when parents need it the most. Simply fold it up, put it in your pocket, and bring it with you everywhere you go. And the best part is, children love it!

Gibbon Carriers has a simple mission: make the most compact and portable child carrier for families on-the-go -- a carrier that children love and that parents can't leave home without.

"I would refer this to all my mom friends, nannies, purchase this for expecting mothers, grandparents -- endless opportunities for this product!" -- Alyse (Seattle, WA)

Founder Christian Brodin decided that there had to be a better solution after he was exhausted from carrying his sleeping 2 year old son during family vacations. He identified a need for a next-generation portable and compact carrier that could be folded up and brought anywhere. This led to the development of the Gibbon Child Carrier, which is the first child carrier that is ultra lightweight, ultra smart, rugged, compact, stylish, and comfortable.

About The Gibbon Carrier
The Gibbon Carrier is the ultimate portable child carrier for parents who are constantly on the move with small children. Made of durable, lightweight, and high quality materials, the carrier weighs only 9.5oz and easily folds up into a built-in carry pouch that can be clipped onto a belt or thrown into a day bag.

Materials & Features
-3 D - 100% polyester spacer mesh - Ultra durable and rated for automotive seat covers, speaker covers, as well as backpack strap and waist strap lining. It carries a high UV rating, meets a CAL 117 Sect E MVSS302 flammability rating and has an abrasion rating of 300,000 Double Rubs.
-3500 Sport Mesh - This nylon mesh is often used double layered for shorts or jerseys. It also works great for linings in jackets and wind pants.
-200 Denier Coated Oxford - 4 oz. per sq yd. 200 Denier. A medium weight nylon that has a nice smooth face, and is waterproof (Black, Red, Royal Blue). It's very easy to clean!
-7400 Nylon Webbing - A very heavy weave of nylon flat webbing with a soft feel and high strength. The perfect material for harnesses.
-Ladder Lock Buckle - An easy threading single piece buckle that is designed to hold under tension and release with a lift of a tab. This makes one-handed adjustment easy, whether releasing or tightening.
-Stealth Side Release Buckle - A sleek design. Lots of strength and a very smooth release action make the stealth a great choice for any side-release application.

Utilizing built-in 2mm and 3mm foam padding, the carrier was designed to be minimal yet comfortable to both children and parents of many different sizes. It also fills a gap in the market for products that accommodate children up to 5 years old.

The carriers are also hand-made in Portland, Oregon, U.S.A.

It's easy to use!

When a child becomes tired while out and about, the Gibbon Child Carrier can be deployed in seconds without hassle. Once a child steps into the carrier and is safely strapped in, he or she can then be carried piggy-back style while all the while keeping the parent's hands free for other tasks, such as shopping for groceries, ordering lunch at a cafe, or handling luggage.

The carrier relieves the frustration that families often experience with strollers and other carriers that are heavy, take up space, create physical discomfort and, at times, emotional exhaustion.

Gibbon is passionate about the idea that traveling with children doesn't have to be a burden. With the concerns of safety and mobility eliminated, families can go back to enjoying their time together.

Here are just a few scenarios where a Gibbon Child Carrier can be used:
-The Airport (free up your hands for suitcases, save checked bag fees or overage charges, walk through security hassle free, de-plane quickly and never miss a flight!)
-Taking children to or picking them up from school
-Grabbing a quick lunch
-While riding public transportation (bus, train, etc.)
-Shopping
-Light Hiking and day trips
-Museums, zoos, parks, concerts, and other attractions
-Exploring travel destinations that aren't stroller-friendly

The Gibbon Child Carrier is over two years in the making. Designed in Oslo Norway and hand-assembled in Portland, Oregon, it has been tested with parents and children across the globe.

Here's what beta testers are saying about it!

"I liked how compact it folded into a bag - very easy to grab and pack for an outing. I also liked the ease of use."

"Simply the most compact and portable child carrier for families on the go!"

Brodin believes that child mobility is a pain that is commonly felt by parents, grandparents, teachers, and guardians everywhere. For him, the last straw was when his wife called from the train, and was in tears from the stress of carrying their 30lbs son who had grown too tired to walk. She had decided to ride the train around, just to allow him to sleep and not having to carry him.

"By time our son was two years old, he was starting to get bigger and heavier which made traveling with him more difficult," Brodin says. "We were carrying him a lot, especially when he would fall asleep, which was uncomfortable and tiring for everyone. We tried to solve it by purchasing several different makes and models of strollers and child carriers, but we quickly noticed that a lot of the solutions out there weren't working for us. They were just too bulky or too complicated to use. The hassle of using these solutions was cutting into the time we were supposed to be enjoying together, so we wanted something that was lightweight, durable and could be used while our son was growing"

The IndieGoGo will be active from February 18, 2016 through April 3, 2016. Two stretch goals will be implemented for the amounts of $55,000 and $75,000 to cover the costs of product certification for use with juveniles as well as an increased production run that will allow the company to open up availability for worldwide orders. The company will release additional reward details including custom colors and design options through the duration of the campaign. 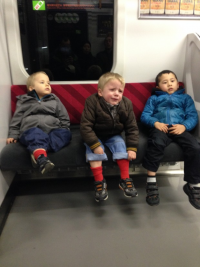