Live on Kickstarter, Gigamunch is an app connecting local chefs to hungry consumers.

How it works is pretty simple. After getting approved to sell on Gigamunch, home chefs post a food item they'd like to sell, complete with a name, picture, description, ingredients, tags, and ready-time. The collection of these chef's posts create an Instagram-like feed for the consumer to browse. If the consumer sees something they like, they can tap the post to find out more information like pictures of the chef's kitchen, ingredients, dietary restrictions, etc.

The consumer can then place their order, choose between pickup or delivery, and pay within the app. The app also offers more detailed features like reviewing meals, viewing chef profiles, following chef profiles, and making requests for chefs to see.

Co-founder Atish Patel originally thought of this idea just to solve the problem of limited food access, but as he and his friends pursued the idea, they discovered they were solving another big problem.

"We've come to find out that people who find joy in expressing themselves through cooking and experimenting with their own culinary creations simply can't make a living doing what they love," says Atish, "Instead, they end up getting a job as a chef where they get told what to make every day. I'm super excited that we have the opportunity to empower people to do what they love and make the world a more delicious place all at the same time!"

Gigamunch is stacking trends that are proving to be successful like decentralization of establishments, online ordering, food delivery from mobile devices, and offering a shared economy market-place. The times are changing, co-founder Xavier Brown points out, "Big successful companies like Uber, Airbnb, Etsy etc. all carved out this two-sided market trend, and we realized if we didn't create cooking version of one of these companies, someone would, and they would be successful. So, we decided to give it a shot!"

This new style of dining opens up many possibilities of what consumers can eat. In the same way Etsy revealed a plethora of niche items for people to buy and Airbnb revealed dramatically new options for travelers to stay, Gigamunch will reveal all kinds of new, creative foods for people to eat.

"As we've gotten to know chefs, we've heard of some wild creations. One chef showed us pictures of a flat red creation, and when he revealed the secret ingredient was Flamin' Hot Cheetos, we initially laughed out loud," says Xavier Brown, co-founder of Gigamunch, "I would be lying if I said I was not curious to try it though. We're incredibly excited to see what kinds of new food-experiences Gigamunch delivers to the world!"

About The Gigamunch Team
The Gigamunch Team recently launched on Kickstarter to help bring this app to life. Gigamunch is set to beta launch by late March 2016 for the Nashville area with plans to expand to major cities nationwide within the coming year. Rewards like decal stickers, t-shirts, aprons, and even promo codes for a free meal are available for backing their project on Kickstarter.

The Gigamunch app is now available to support on Kickstarter: http://kck.st/1LcvEVQ 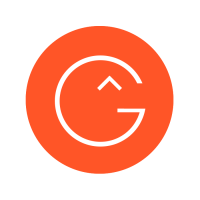 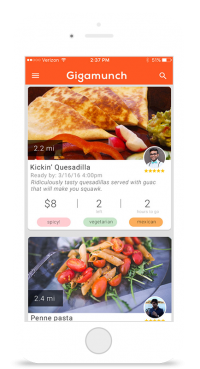 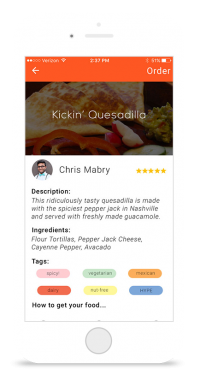