Salt Lake City, UT -- (ReleaseWire) -- 07/16/2019 --Colorado River & Trail Expeditions has been operating guided grand canyon rafting expeditions and Alaska rafting on the Alsek and Tatshenshini Rivers in Glacier Bay National Park and Preserve since 1978. From the upstairs window of our warehouse in Haines, Alaska, (on the inland side of the Chilkat Range, "just over the mountains" from Glacier Bay)

For centuries, the Lynn canal facilitated trade and migration between Native coastal settlements and interior villages in what is now Alaska and northern Canada. In hand-carved sea-worthy canoes, decorated by totemic symbols, aboriginal people paddled up an down the Lynn Canal to hunt, fish, and engage in trade. This followed the migrations of birds, fish, whales, and other wildlife, and harvested seasonal plants and berries. This waterway of importance for both for commerce, tourism, and wildlife. Visiting certain times for the year are the festive lights of cruise ships heading toward Skagway, which is located at the terminus of the Lynn Canal. During the day, it is possible to watch humpback whales breaching, as they migrate up and down the waterway following schools of fish.

It was common to see whales every summer, but not as many in recent years. Past years whale citings were common to see six or seven whales breaching alongside the ferry that brings us from Juneau to Haines. Last summer (2018), the ferry captain spotted one humpback. It is unclear what has caused the number of whales swimming in the deep waters of the Lynn Canal might be decreasing. Today, a report from the National Park Service regarding the declining presence of humpback whales in Glacier Bay and Icy Strait, just a little farther north and west from our location on the Lynn Canal.

It was documented 100 unique humpback whales, lowest annual count since 2002.

Humpback whale abundance in Glacier Bay and Icy Strait has declined by >50% since peaking in 2013.

This downtrend trend has been most dramatic in Glacier Bay, where it was identified only 45 whales in 2018, a 72% decline compared to our record high count of 161 whales in 2013.

It was documented only one mother/calf pair in 2018 but by mid-August the mother had lost her calf, marking total reproductive failure for the first time in this 34-year study.

For the third year in a row, it was observed numerous abnormally thin whales, however, it appears this was less common than in 2017.

Although our monitoring results indicate population-level changes over the past five years, it is not known if the declines in whale numbers represent a shift in distribution and/or increased mortality from 2014-2018. Efforts to locate the whales missing from Glacier Bay and Icy Strait in catalogs from other feeding areas (e.g., British Columbia and Prince William Sound) have so far yielded no matches. Through a new collaboration with Happywhale.com, it was recently initiated expanding our search area to the broader North Pacific.

Within Alaska, the consistent, long-term, monitoring of humpback whales is limited to Glacier Bay and Icy Strait, although our findings are consistent with negative trends in abundance, reproduction, and body condition for humpbacks in other areas in the central North Pacific.

About Colorado River & Trail Expeditions
Colorado River & Trail Expeditions (CRATE) has been a licensed white water rafting concessionaire in the Grand Canyon since 1971. CRATE began rafting other stretches of the Green River and Colorado River shortly thereafter, including Cataract Canyon, Desolation Canyon, and Westwater Canyon. In 1978, The group explored the Tatshenshini and Alsek Rivers in Alaska and soon added those wild and remote rivers to our catalog of rafting adventures. For over 40 years, the team has consistently provided high quality, fully outfitted rafting adventures through some of the most beautiful landscapes in the west. 801-261-1789 or 801-268-1193. 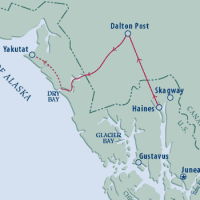