Los Angeles, CA -- (ReleaseWire) -- 10/25/2018 --Global Genesis Group (GGG) is proud to announce they will be handling worldwide distribution for the intense new documentary feature "Journeyman" about the inspirational true story of the near fall and true rise of the "Bonnie & Clyde of Professional Wrestling" Francisco Ciatso and Stormie Lee. "Journeyman" was directed by Paul Steward and Francisco Ciatso.

Like a real life ROCKY story, JOURNEYMAN intimately follows the Francisco and Stormie as they deal with money, their marriage and day to day survival issues as they drive from town to town, performing in local wrestling shows for practically no money but showing true passion to do what they love and succeed as entertainers in the brutal career of Wrestlers and grow as husband and wife.

Francisco Ciatso stated, "I was going through the worst time in my life and Paul Steward was capturing it on film in the moment, it was scary and fun all in the same breath. One minute I was crying, the next jumping around in an empty field. I wouldn't have it any other way because every time I lace up my boots and climb into the ring I'm apart of something much bigger than myself. I'm creating memories for people that will last a lifetime "

"Journeyman digs deeply into Francisco and Stormie's passion for professional wrestling. Not only does it reveal the true world of wrestling that few people get to see, but it's also a love story of two people struggling as a couple in a very unique environment. We are proud to bring such a fantastic journey to viewers around the world," announced Charles Morris, Jr. VP Development & Acquisitions for GGG.

Francisco Ciatso is currently starring in "RING WARRIORS" as part of the wrestling team called "The Slambinos".

" RING WARRIORS airs on WGNAmerica on Saturday morning, and is produced and distributed by Global Genesis Group. 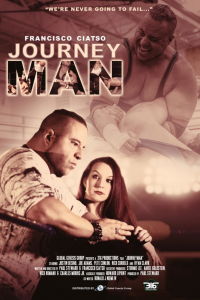