Global Genesis Group in the Spotlight During 2018 International Festival Season

Henderson, NV -- (ReleaseWire) -- 04/10/2018 --Production and distribution powerhouse Global Genesis Group is making a splash at festivals across the globe. The Company's foray into animation has two of their newest titles taking center stage.

"Moomins and the Winter Wonderland" has been selected as the Opening Film at the Leeds Young Film Festival taking place from 26 March - 5 April 2018. It will be entered into competition for both the Golden Wings Audience Award and the Young Jury Award. This is the Film's UK Premiere.

The film is also an official selection of the 44th Seattle International Film Festival (May 17 to June 10, 2018) in the Films4Families section. Celebrating its 44th year, the Seattle International Film Festival is the largest and most highly-attended film festival in the United States, showcasing more than 400 films from over 70 countries to an audience of over 140,000 attendees annually.

"Moomins" will also make its Argentinian premiere at Baficito (Little BAFICI) one of the most endearing sections of the 2018 Buenos Aires International Festival of Independent Cinema (BAFICI) beginning on Wednesday, April 11 till Sunday, April 22. BAFICI 2018 presents 13 must-see productions, with Moomins and The Winter Wonderland slated to be a major highlight.

"Little Hero," the newest animated picture from Global Genesis Group, has been selected for The Competition portion of the PULCINELLA AWARDS 2018 in the category ANIMATED FEATURE FILMS. This is part of the 22nd International Cross-Media and Children's Television Festival called Cartoons on the Bay running from April 12th to 14th in Turin. The announcement of the winners and the presentation of the Pulcinella Awards 2018 will take place during the Closing Ceremony on Saturday April 14th.

Global Genesis Group will be attending MIPTV 2018 to present their latest selection of TV series and features at Palais -1.C57. In may, The Company will also be exhibiting at the Cannes Film Market. 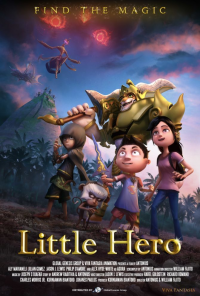