Henderson, NV -- (ReleaseWire) -- 08/18/2016 --Global Genesis Group is excited to announce that their film Happy 40th, an independent film that won over audiences on the festival circuit, will have its Worldwide premiere on Amazon Prime on August 19, 2016. Happy 40th won the Audience Award at both the Woods Hole Film Festival and the Bend Film Festival. Global Genesis Group (GGG) is a Nevada/Los Angeles-based distributor with a 2017 theatrical release slate that includes the horror/thriller Escape Room starring Skeet Ulrich and Sean Young, the 3D animated fantasy Troll, A Tale Of A Tail directed by Kevin Munroe and Crave: The Fast Life, a faith based film starring René Alvarado of the HULU's hit series East Los High.

The soundtrack of Happy 40th is also being released to all the major digital platforms for download on August 19 by The Orchard, a film and soundtrack distribution company based in NYC.

Director Madoka Raine's engrossing debut feature is a heart-wrenching drama about Sophia, a woman turning forty who invites her three best friends over for her first weekend of celebration and reunion, since her self-imposed two year isolation after a car accident left her paralyzed. During the party these lifelong friendships and Sophia's marriage will be taken to the breaking point due to revelations of betrayal, resentments and anger.

Madoka Raine, who not only directed the feature but wrote it, produced it, and also starred as one of Sophia's friends, stated "I'm so excited to have our film make its worldwide debut on Amazon. I have had an incredible journey with Happy 40th. From getting it made to touring the festival circuit, and now finally getting distribution for both the film and the soundtrack. People have always asked me how they can show the film to a friend because they fell in love with it. Now I can say it's available on Amazon Prime!"

Charles Morris Jr., VP of Development & Acquisitions for GGG stated, "This is the kind of movie that harkens back to the glory days of independent films. It is well-written, with amazing acting and a fantastic look. The emotional depths of each character is inspiring from an artistic director like Madoka Raine, who also wrote, acted and produced this feature. In the film Raine examines fragile relationships to reveal uncomfortable truths about the secrets we keep from each other, and from ourselves. Global Genesis Group is proud to be associated with great filmmakers like Madoka Raine, and are ecstatic that we are the company releasing this beautiful movie to the world." 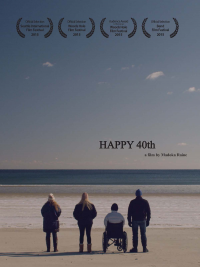