Henderson, NV -- (ReleaseWire) -- 09/11/2018 --US-based production and distribution company, Global Genesis Group, is thrilled to announce they will be hosting Exclusive TIFF Premieres of the highly anticipated animated feature "Troll: The Tale of a Tail."

"Troll: The Tale of a Tail," is a major new animated feature from Canadian native Kevin Munroe, director of the worldwide box-office smash TMNT and also last year's Ratchet & Clank. His work includes development and design on prolific animated projects for the Jim Henson Company, Stan Winston Studios, Shiny Entertainment, Disney, Warner Bros., Cartoon Network and Nickelodeon, as well as writing on prestigious franchise projects like "TMNT." Kevin Munroe is established as a major force in the world of animation.

"Troll: The Tale of A Tail" is a fresh take on the hero's journey as Trym, a young Troll Prince, only has three days to save his father and return the Troll kingdom to normal. When Trym's father, King Grom, is turned to stone, and his tail stolen by the devious Pixie, Trym and his best friend Freia, along with the two-headed goofy JinJan, must go on a wild and dangerous journey across the Forbidden Forest to retrieve King Grom's tail. During the journey, Trym will not only battle his powerful cousin Grimmer and the fearful Pixie, but he must overcome the challenges of growing up to become the hero that the Trolls need.

"We're so excited to bring such a fantastic film by a remarkable Canadian filmmaker to TIFF. We can't think of a better place to introduce 'Troll' to the world," stated Rick Romano, President of Global Genesis Group.

"Troll" has already received fantastic reviews with pre-sales into multiple territories. Distributors attending TIFF now have the opportunity to experience all that this film has to offer.

Global Genesis Group are exhibiting at TIFF with VP of Sales, Alan Green, and VP of Acquisition and Development, Charles Morris Jr., and are located at Suite 1552 in the Hyatt Regency Toronto. 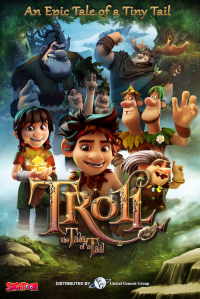