Henderson, NV -- (ReleaseWire) -- 08/21/2018 --Global Genesis Group's gripping drama "75" will be making its debut in theaters across the United States beginning next month.

The film follows Viola (Shannon Faith), a hard-working therapist, as she helps four families battle the harrowing effects of heroin. Directed by visionary Joe Zappa (Clever Girl Series) and produced by Brand Old Productions, "75" is the best present day movie about heroin since TRAINSPOTTING as the movie dives into the harrowing heroin epidemic affecting cities across the United States.

Interstate 75 is a central distribution artery of heroin, making Cincinnati the second highest overdose capital in America. In "75" the movie, we follow an interlocking story involving four families, an overwhelmed mental health care professional and two desperate lawmen over one tragic weekend in the Queen City.

Charles Morris Jr., V.P. of Acquisitions for Global Genesis Group, stated, "75 is a raw, tragic narrative that pulls the audience deep into the lives of these middle class families in Cincinnati. We helplessly watch in horror as these characters end up desperately turning to heroin and opioids and their families are ripped apart with grief."

With America's opioid crisis at an all-time high, a film like 75 is remarkably relevant at this moment in time. Over the past two decades, pharmaceutical companies have flooded the healthcare system with opioid painkillers. In 2016, more than 64,000 people died of drug overdoses in America according to the Centers for Disease Control and Prevention.

"75" has already won a number of awards including Best Picture at the Los Angeles Film Awards, Best Drama at the New York Film Awards amongst others and is slated for a limited theatrical release across the United States this September. 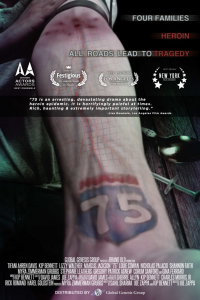