Singapore -- (ReleaseWire) -- 07/21/2019 --For foodies, creative cooks, and umami lovers around the world, Christmas has come early. Ken Koh, a third-generation artisan soy sauce maker from Singapore, is making 500 limited-edition bottles of his family-owned soy sauce brewery's most coveted accomplishment – natural, aged Nanyang Soy Salt – available to the public for the first time ever. Ken is running a Kickstarter campaign through August 22, 2019, giving backers a chance to purchase their own treasured bottle of umami sea salt, and to taste the richness and brilliance of 60 years of traditional craftsmanship, crystallized into one of the most unique and precious salts in the world.

Umami soy salt is naturally made, a result of traditional soy sauce production methods, sunlight, and time. Each crystal has been aged for at least ten years in the clay vats that are used by artisan sauce makers. The soy salt crystals contain the very essence of what makes soy sauce such a prized ingredient in Asian cuisine – umami. The salt is literally bursting with umami, which makes it a perfect accompaniment to steaks, other grilled meats, rice bowls, soups, and even ice cream for those who crave a profound umami experience.

Ken and his family are selling their Limited Edition Nanyang Soy Salt in glass jars, with each bottle containing 100 grams. The soy sauce that the soy salts come from is made with 100% non-GMO soybeans, homemade yeast, and wheat flour, with all soy sauce production taking place in the family brewery in Singapore. The goal of this Limited Edition release is to raise enough money to help restore the soy sauce brewery and to preserve this centuries-old craft for the world. The money will be used to purchase new equipment for bottling and labeling so the brewery can produce more of its famous soy sauces without compromising the quality or taste of Nanyang Soy Sauce.

For those who want to become one of the few owners of a bottle of Nanyang Soy Salt, the Limited Edition bottles are available on the project's Kickstarter page. Interested backers can choose from the glass Soy Salt bottles or a special Nanyang Soy Salt Gift Set, which includes a ceramic salt grinder filled with Nanyang Soy Salt. There are only a limited number of bottles left, as this popular campaign has already exceeded its goal by 288%!

Once the 500 bottles are sold, there won't be any more of this inimitable umami soy salt left anywhere in the world, at least not for another few years while Ken's family soy sauce brewery continues handcrafting phenomenal sauces, and the resulting soy salt crystals have the chance to age for another decade.
To learn more or to purchase your own umami soy salt, visit the project's Kickstarter page. 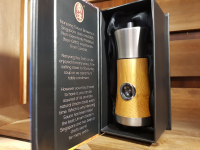