New York, NY -- (ReleaseWire) -- 02/17/2016 --After selling her business three years ago Debbie Shepherd decided to retire. Then came the news that she was going to have a granddaughter and that was to be the beginning of a new business that now sees Debbie busier than ever.

A proud mother of three sons, Debbie spent over 30 years buying clothes for boys. Delighted by the arrival of her grandson, this nevertheless meant even more shopping for boys. Then came the news that she now had a reason to shop for a baby girl and Debbie hit the stores again.

Deciding it was practical to buy essentials online, one of the items on her list were baby bibs. Conventional bibs with ties or Velcro fastenings now appeared old-fashioned and Debbie felt they would spoil the look of the adorable outfits she had bought. Debbie was looking for bibs cute enough for her granddaughter to wear most of the day but that were absorbent for feeding and catching teething drool.

The trendy triangular shaped bandana bibs looked more stylish but the available patterns were predominantly geometrics and lacked the prettiness she was looking for. Design being a lifelong hobby, Debbie decided to create her own product to fill what she felt was a gap in the market. Just a few months later the first set of Wobbly Noddle Bandana Bibs went on sale on Amazon in the US in time to coincide with her granddaughters' birth at the end of last year. They have proved a huge hit with moms and baby gift purchasers ever since.

Wobbly Noddle Bandana Bibs feature a classic design but with a decidedly modern twist. In complimentary colours and patterns, there are four individual designs in each pack. An all-over modern stick flower on a pink background is echoed on another bib by a single flower on a plain blue background. Scattered hearts in pink, blue and green and a pink and white wave design complete the set. Debbie now intends this to be the first in the Wobbly Noddle range of exclusively designed bibs.

Fashioned from super soft absorbent 100% organic cotton on the front, Debbie has incorporated a clever panel that efficiently soaks up drool and dribble from baby's chin and neck thereby preventing irritation and rashes. The printing process uses safe, eco-friendly dyes which won't run or fade in the wash and a fine polyester fleece forms a waterproof barrier underneath that keeps moisture away from clothing and skin. Adjustable nickel-free snaps at the neck mean these bibs will fit from infant to toddler. Manufactured with attention to detail, stitching and finishes these premium quality bibs are now available for little girls all over America exclusively on Amazon.

For further details or to purchase a pack or two of Wobbly Noddle Bandana Bibs go to: http://www.amazon.com/dp/B018QWLRZ0. 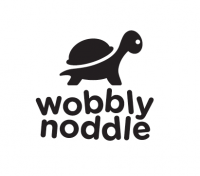 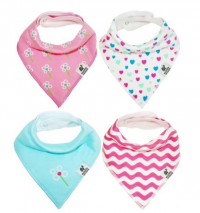 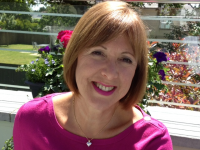